The agency appears to be named after the real-life Drug Enforcement Administration. It plays a small role in the HD Universe, being mentioned but playing no role with the story events in Grand Theft Auto IV and Grand Theft Auto V. In Grand Theft Auto Online, however, the agency makes its first appearance in the heist finale of "Series A Funding."

Only two mentions of the DOA exists in GTA IV, one on the LCPD sub-station in Star Junction and the other reference is seen on a member of the Skinheads, who has a tattoo of the logo.

The DOA makes its only appearance in the finale of heist mission "Series A Funding." During the final pre-completion cutscene, players deliver their stolen drugs to Trevor. Later, Trevor is seen dealing the drugs to a strange man who, unbeknownst to Trevor, is an undercover DOA agent. After realizing that the deal was actually a sting operation, Trevor escapes by jumping off of a cliff into the ocean, with a team of DOA agents and LSPD police officers shooting at him from atop the cliff.

DOA agents shooting at Trevor while trying to escape. 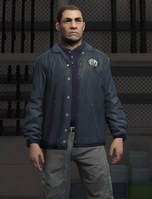 DOA Agent.
Add a photo to this gallery

Retrieved from "https://gta.fandom.com/wiki/Drug_Observation_Agency?oldid=1188521"
Community content is available under CC-BY-SA unless otherwise noted.