• ­Drop Zone is captured by a team.

• ­All teams are eliminated during Sudden Death.

• ­All players or opposing teams disconnect.

“Teams of paratroopers jump from Cargobobs hovering high above, then race to the ground to seize and maintain control of a small, exposed patch of terra firma. No man is an island here - you and your squad mates will need to attack and defend as a unit.”
— Rockstar Newswire description

Drop Zone[1] is an Adversary Mode featured in Grand Theft Auto Online as part of the January 2016 Update, released on January 28, 2016.

“Teams jump from an aircraft and parachute to the ground where they attempt to control the 'drop zone'. First team that captures the drop zone wins. The time doesn't have to be continuous. If no team wins in the time limit, sudden death will be triggered. Two, Three or Four teams can compete.”
— In-game description.

Two to four teams; Green, Orange, Purple, and Pink, with up to sixteen players, are placed in team-separate Cargobobs hovering high above the target area. Players are required to jump out and parachute towards the target area, which is denoted by a yellow circle on the mini-map and the ground. The circle changes color corresponding to the team that is currently within that circle.

In the bottom-right corner of the HUD, the player can see each team's capture progress denoted by a bar that slowly fills up over time. The more players present in the circle, the faster the bar will fill up. Capturing the drop zone does not have to be continuous, and the progress pauses if all team members within the circle are killed. To capture the drop zone, all that the player has to do is to walk into that circle and stay alive until the bar fills up.

Players will always re-spawn inside their Cargobob and will have to parachute down each time they are killed.

Each player is dressed up in a unique clothing combination consisting of color-coded Bulletproof Helmets, Utility pants, Gloves, and Parachutes, and a Black Flight Suit top with Black Flight Boots. These outfits are unique to this Adversary Mode and cannot be obtained in Freemode.

All players are equipped with the following equipment by default:

Weapons and items can be found around the target area, ranging from Health Packs and Proximity Mines to Special Carbines and Sniper Rifles.

“Adrenaline junkies will enjoy one of our faster paced Adversary Modes, Drop Zone. Barrel through the air at top speed with your team towards the demarcated area and lock it down for as long as you can.”
— Description[2] 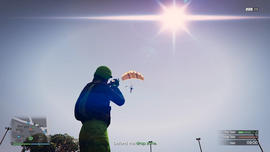 Retrieved from "https://gta.fandom.com/wiki/Drop_Zone?oldid=1306720"
Community content is available under CC-BY-SA unless otherwise noted.