• ­Drive close to any dealers you see, so Zhou can kill them.

• ­Keep attacking the dealers until the carnage meter is full.

• ­You can help Zhou by performing drive-bys on the dealers.

• ­Stay in the truck while Zhou attacks the dealers.

• ­Find another group of dealers for Zhou to attack.

• ­Find another group of dealers for Zhou to attack.

• ­Drive Zhou to the next group of dealers.

• ­Take Zhou back to his club.

• ­Watch out for more dealers looking for revenge.

• ­Drive into the garage.

Trail Blazer (Only if Raw Deal has been completed)

Zhou: "Even though we have disciplined the dealers who insulted Hsin with their disrespect, for justice to be truly done, they must be thought a more serious lesson."
Huang: "Would that lesson be 'next time you're reincarnated, get a life insurance?"
―Zhou Ming and Huang Lee

Driven to Destruction is a mission in Grand Theft Auto: Chinatown Wars, given to protagonist Huang Lee by club owner Zhou Ming from his club in East Island City, Dukes.

Huang Lee meets Zhou Ming at his club in Dukes. Zhou tells him that those Jamaican drug dealers are not showing any respect after he saved their cars. Zhou is not happy and wants to teach them a lesson. Huang gets into a truck whilst Zhou gets on the back flatbed with a Minigun.

Get in the truck, Zhou is already on the back and ready to go. Drive to the indicated position in Beechwood City. Once you arrive drive Zhou up to the large group of drug dealers marked as red dots. A carnage meter will now appear at the top right of your screen, you need to fill this to complete the mission. Let Zhou flatten the dealers with the minigun, you can help too if you like, molotovs work well here. Cars will also appear, let Zhou deal with them but don't be near them when they blow. After they are dead more red dots will appear on your map indicating more dealers. Drive to them and take them out. Then another bunch of dealers will appear and another, deal with them both to fully fill up the carnage meter. After the meter is full you will need to drive Zhou back to his apartment. The dealers will try to seek revenge on you but don't worry, Zhou will finish them easily. After you have reached his club drive the truck into the garage to complete the mission. 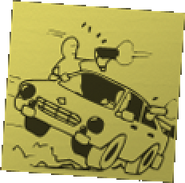 Driven to Destruction
Add a photo to this gallery 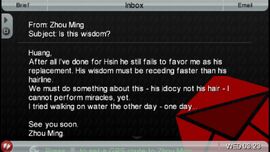 Huang receives a e-mail from Zhou. 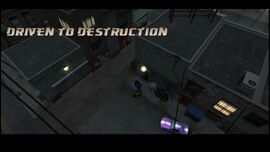 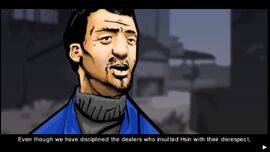 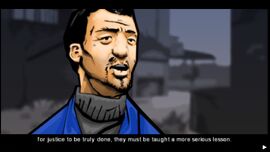 Zhou wants to teach them a more serious lesson. 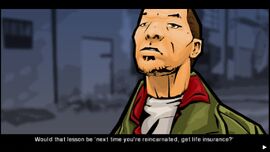 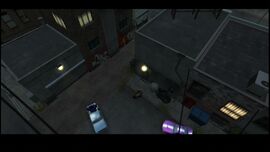 Zhou jumps into the back of his Bobcat and gets a Minigun. 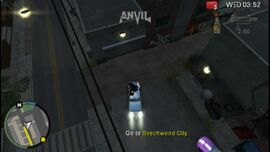 Zhou wants Huang to drive to Beechwood City to kill some Yardies. 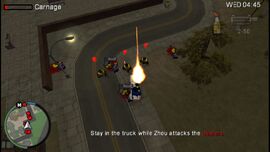 Zhou killing the Yardies in Beechwood City using a minigun. 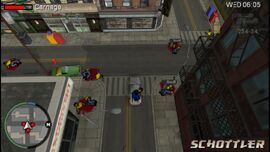 Zhou killing another group of Yardies in Schottler. 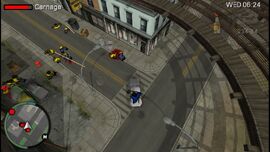 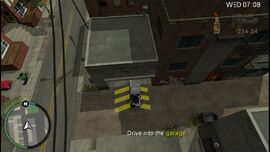 Driving back to his club. 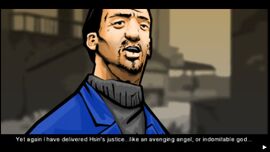 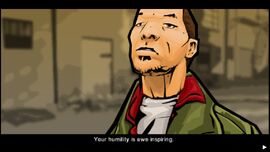 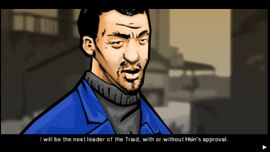 Zhou says he's gonna be the next leader of the Triad, with or without Hsin's approval. 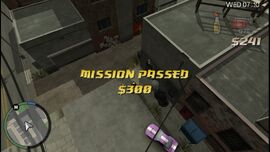 The reward for this mission is $150. The next mission, Trail Blazer is unlocked.

"Zhou got into deep shit with Hsin over stopping those dealer's stash cars being blown up.

Hsin wanted blood, so we headed over the dealer's turf and hit their gang hard.

...Zhou's getting impatient with Hsin. He's not going to wait around to be handed the leadership."

Retrieved from "https://gta.fandom.com/wiki/Driven_to_Destruction?oldid=1166348"
Community content is available under CC-BY-SA unless otherwise noted.