"What you do when you really need to get something off your chest, fast! The solution for the extremely devout, in a hurry."
―GTA San Andreas Website.

The church is located in Palomino Creek, Red County, San Andreas. There is a small confessional booth and a driveway going up to it, implying that people can receive services from the confessional by driving up alongside it. A Romero may sometimes spawn in the driveway of the church and a Shovel can be found in the graveyard. The church is inaccessible and plays no role in the storyline whatsoever. Though on closely noticing the tombstones, one can find the graves of Steven Mulholland and Scott Wilson, both were developers in Rockstar, the graves thus serve as an Easter Egg in the game. The church is also featured on the game's official website. 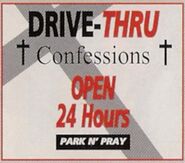 Advertisement for the church from the game's manual.

The graveyard.
Add a photo to this gallery

Retrieved from "https://gta.fandom.com/wiki/Drive-Thru_Confessions_Church?oldid=1074778"
Community content is available under CC-BY-SA unless otherwise noted.