Standard White - 100%
“You've customized your other Yosemite so it's a flame-liveried, chrome-engined, four-wheeled hole in the ozone layer and you don't think it can get any more ridiculous? Well, hold my beer. The Drift Yosemite turns a classic pickup truck into some kind of nightmare beast with an insatiable appetite for asphalt. Arrive on the track and other racers will run in fear. Drive it on the road and watch mouths open in awe. A mad genius redesigned this bad boy from the ground up and all you need to do is hand over your credit card.”
— Southern San Andreas Super Autos description.

The Declasse Drift Yosemite is a custom pick-up truck featured in Grand Theft Auto Online as part of the continuation of the The Diamond Casino Heist update, released on February 6, 2020, during the Drift Yosemite Week event.

As it is essentially a modified Yosemite, the vehicle is also based on the second generation Chevrolet C10, but fitted with modification parts that draw ideas from the Ken Block Ford F-150 Hoonitruck.

The vehicle sports wide-body fenders and sports seats on its interior, as well as cut portions on the hood and the front quarter panels for the upgraded engine. The cabin no longer features a sunstrip by default, but can be added via modifications. Unlike its original counterpart, the Drift Yosemite no longer possesses air-ride suspension. Furthermore, while its modification options are identical to its original counterpart, it has different liveries not available to the original Yosemite.

Colors on the Drift Yosemite are distributed in almost the same way as the Yosemite and its Rancher variant: the primary color covers most of its bodywork, the secondary color paints the lower side alongside the Declasse badge, and a colorable interior from the Bobcat XL (albeit set to black and not accessible through mod shops). The rims are seemingly identical to the "Drag SPL" muscle rims available in Los Santos Customs, but have a permanent grey finish and a bolted-on outer surrounding that also supports a dedicated color (albeit only present on examples from Content Creator, the ones from the Diamond Casino Heist and the one from the Lucky Wheel, all of them set to black). It also sports Fukaru drag tires.

Like the Drift Tampa, the Drift Yosemite lives up to its name with its drifting capabilities, though unlike the Drift Tampa, it is somewhat less controllable and seems to rely more on its grip. Furthermore, because of its maxed out acceleration, it has a large amount of wheelspin when trying to take off. Its top speed is relatively high thanks to its two turbochargers fitted on the hood. It also has a high amount of durability in crashes, though its widened tires are vulnerable to gunfire. Like its original counterpart, it can handle dirt roads fairly well, though it struggles to keep its speed on dirt roads due to the acceleration.

Giving the Drift Yosemite full suspension upgrades will cause its wheels to clip through the arch fenders. It also makes it far less recommended in pulling off wheelies since its back-end will hit the ground, disrupting its acceleration. In addition, its bodywork does not deform against collisions.

Like the standard Yosemite, the vehicle is powered by a single-cam V8 engine, although it is fitted with two turbochargers. The engine sound seems to be a lower-revving variation of the one used on the Deviant and the Rampant Rocket. 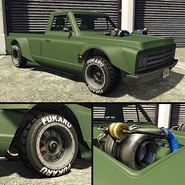 The Drift Yosemite in the cinematic preview on Rockstar Games Social Club.

A custom Drift Yosemite shown without the exposed turbochargers. 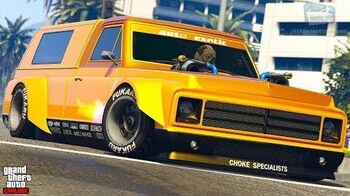 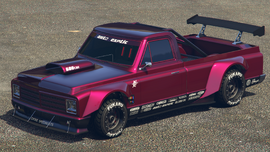 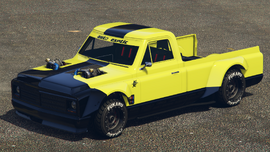