Standard White - 100%
“You brush the accelerator, and it happens: your ear drums shatter, your bowels surrender, a thousand angry horses stampede through all four titanium-reinforced wheels, the tires melt in a cloud of acrid smoke - but all you know is that you're going somewhere really, really fast. Short of saddling a crazed rhino, the Drift Tampa is the most brutal driving experience money can buy.”
— Southern San Andreas Super Autos description.

The Drift Tampa is, as its name suggests, primarily based on the Tampa, which is based on the 1964-1973 Ford Mustang and 1970/1971 Dodge Dart. The modifications take clear influence from both the 1965 Ford Mustang Hoonicorn RTR, a Gymkhana Car driven by Ken Block, and the 1969 Mustang RTR-X driven by Vaughn Gittin Jr. The entire car is lowered and is much wider than its standard counterpart.

Design-wise, the Drift Tampa has some major changes to its overall stance. The front fascia hasn't had too many alterations. However, the front bumper has been cut out to give more room for the lower intake. Also, underneath the lower bumper and grille, a large splitter with logos and stickers on it is found with 2 splitter strut braces on each side. The bonnet features exposed velocity stacks with hood pins added for decoration. The dual front headlights are taped.

On the sides, the front quarter panels feature extended bolt-on arches to create a wider, aggressive appearance. The back of the front arches have been omitted so the wheels are exposed, and a set of 4 strake lines can be seen just behind the arches for decoration. Below the doors there are underlying side skirts, and side-mounted exhausts can be seen exiting behind the doors. The rear-side windows feature rally netting and the side windows' glass is removed, along with a decorative roof scoop and a sunstrip.

Towards the rear fascia, the entire rear bumper has been modified. A large diffuser has been added, which extends its blades lower, towards the ground. The rear quarter panels also feature bolt-on fenders which are bolted on top of the original body work. A large, stock car ducktail spoiler is mounted to the rear.

The interior of the car keeps some of the features from the normal Tampa, but was fitted with numerous switches on the dashboard, a roll cage and race seats. The doors were also modified to feature carbon-fibre panels with pull straps on it, also revealing protective frames on the insides.

The primary color of the vehicle is applied on the bodywork, roll cage and interior stitching, while the secondary color is applied on the roof, pillars and brake calipers. Similar to vehicles like the ETR1 and RE-7B, the Drift Tampa features racing slicks for the stock wheels, with the rims being similar to the "Revolver" rims also seen in the standard model.

The Drift Tampa does what it says on the tin; it has excellent drift capabilities, and doughnuts can be easily started and maintained with its all-wheel-drive layout. The high output engine gives it reasonable driving force, which is seen to be even more effective with modifications, giving the car an excellent amount of boost when setting off. The car tends to backfire, not as much as other extreme racing cars, however much more than a regular drift car.

Because of the modifications and the way it handles, the Drift Tampa is re-categorized as a "Sports" vehicle rather than the Tampa's classification of "Muscle", denoting a significant upgrade.

A screenshot of the Cunning Stunts update, with the Drift Tampa jumping next to an Omnis. 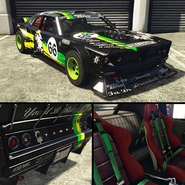 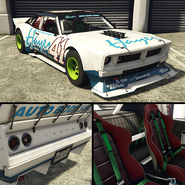 The Drift Tampa on the updated Rockstar Games Social Club.