The Dozer is designed as a four-wheel front loader, appearing to be based on an older Caterpillar 980B, but featuring an open cabin with no doors and no windows. The cabin frame is derived from the Forklift, albeit having the lights removed in favour of large rear-view mirrors. The vehicle is only available in a blue-greenish color with DUDE markings on it.

The Dozer is also equipped with an adjustable dozer blade.

The Dozer returns in Grand Theft Auto V, now designed as a tracked vehicle, apart of being colored with a traditional Cat Yellow and usually with a worn paintjob, likely due to its purpose. It is based on the Caterpillar 963D, with other excavator elements present. It is now manufactured by HVY.

The vehicle features an enclosed cabin for the driver, with two doors and a large scoop at the front, an unusable hoe mounted on the rear and four headlamps mounted on each of the cabin's quarter (although only the two front ones are used in-game). As with the Rhino, the Dozer is a unique vehicle that features continuous tracks, each one consisting of a front idler wheel, a rear sprocket, three road wheels and two return rollers.

The rear portions of the cabin have various meshed protective panels, though they are meant to protect the glass from debris impacting the cabin.

The Dozer is very large and heavy, and therefore has a slow top speed; the Dozer also features rear wheel steering, meaning that it is pushed into turns instead of pulled, making for a very small turning radius, although this also makes the Dozer more vulnerable to tailspins if in higher speeds. Its movable scoop can be used to plow through a bunch of other cars, which is no problem for this vehicle; as its weight and torque make it nearly unstoppable. However, they won't have any visual injuries.

Due to its bottom-heavy design, the Dozer is designed to rest upright after a flip. This feature is very useful in Hunter Quarry's Quarry missions, as players can drive and flip the vehicle down several tiers of the quarry without the risk of having the vehicle resting on its top or side. The open cab leaves the player vulnerable to being pulled out of the vehicle by hostile NPC's.

It shares the same engine sound as the Walton and the Tractor.

Since the Dozer is depicted as a heavy and tracked vehicle, it is predictably a slow vehicle, even slower than both the Lawn Mower and the player on foot. Handling is sluggish due to the vehicle's weight and speed, requiring a few seconds to correct it in case the vehicle is going in the wrong direction. Players are highly vulnerable to gunfire due to the entire cab surrounded by windows, as well as explosive weapons due to its profile and slow speed.

The Dozer features a working concave scoop at the front that can easily pull and raise small vehicles and even trucks, and sometimes "grabs" them. The Dozer's scoop is even capable of lifting up a Jet by the nose landing gear. However, this may destroy the plane. It can also flip a Rhino Tank, although only from certain angles or positions. Any NPC or player caught in the scoop will likely die due to repeated collision damage. However, its lack of torque means that even pushing small vehicles such as the Issi or Futo will almost certainly lead to losing a great deal of what little speed the Dozer can achieve. 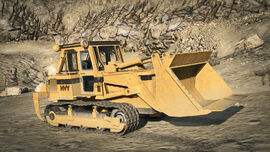 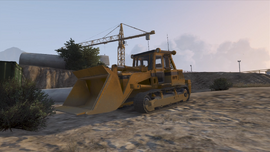 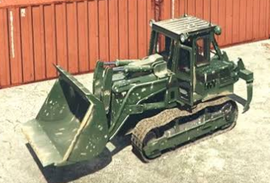 The Dozer obtained through "Arena Points" in GTA Online.

Retrieved from "https://gta.fandom.com/wiki/Dozer?oldid=1201878"
Community content is available under CC-BY-SA unless otherwise noted.