The building is located next to the Rockstar Building and is the second tallest building in Downtown Vice City. The rooftop is inaccessible to the player due to the height limit of aircraft. However, if the player manages to reach there, the ground is not solid, so the player cannot land on or near it.

Only one of the three holes of the building is accessible, by jumping out of the window of the neighboring building with a motorbike. 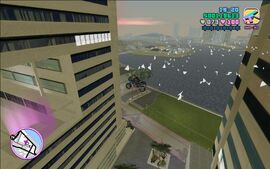 Tommy jumping to the hole of the building using a motorcycle during the mission G-Spotlight. 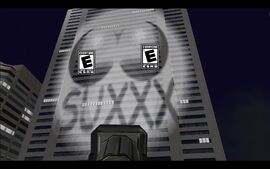 The Candy Suxxx movie advertisement after the finishing the mission.

The design of the building could be based on the Atlantis Condominium, a condominium building in Miami, Florida, which was featured in the opening credits of Miami Vice and briefly in Scarface for exterior shots of where Frank Lopez (portrayed by Robert Loggia) lived.

Retrieved from "https://gta.fandom.com/wiki/Downtown_Hole_Building?oldid=1157615"
Community content is available under CC-BY-SA unless otherwise noted.