GTA Wiki
Register
Don't have an account?
Sign In
Advertisement
in: Pages with non-numeric formatnum arguments, Vehicles, Vehicles in The Lost and Damned,
and 10 more
English

“The Dinka Double-T is all about speed and acceleration at the expense of comfort and fuel economy. If you're the kind of person who loves the thrill of going 195mph knowing that the slightest bump in the road could give you a hernia at any moment, this is the sports bike for you.”
— Southern San Andreas Super Autos description.

“Modern street bike for the soldiers, this 900cc in-line 4 produces 170bhp. It dominated the market 'til the 801 showed on the scene. Still a capable weapon in the right hands - its agility and availability mark it out as a true modern classic. User-friendly and reliable, this 180mph rocket has few vices and is still lighter than most of its $$$ rivals.”
— Uptown Riders description.

The bike's front fairing and headlights are similar to those of the Ducati Desmosedici, while its overall body design is more reminiscent to the Aprilia RSV4.

The Double T is described as a modern bike with a seemingly aggressive styling and aerodynamic profile, where the front section has a small fender mounted directly to the fork legs, while the upper section is occupied by the fairing with dual headlamps at the bottom and a triangle-shaped glass visor. The upper edges of the fairing have two triangular extensions housing amber signals on the sides and rear-view mirrors on the back. The upper plate holds two independent handlebars and the inner portion of the fairing is finished in carbon fibre, though does not seem to have any sort of speedometer.

On the main body, the bike has a seemingly large fairing with vented sides, as well as a lower fairing below the engine bay and a black basic frame holding foot pegs for the rider. The fuel tank is relatively large and rounded, taking up most of the upper area.

The rear section consist of a rear structure with black seats on top and a single tail lamp on the end, as well as dual exhaust tubes below, partially covered by a carbon-fibre panel. The rear wheel is connected by a single-sided swing-arm on the left, with a small mudguard and a single suspension spring. There are also rear frames with foot pegs for the passenger, as well as the chain drive and sprocket on the left.

The bike spawns in a variety of primary colours on most of the body and secondary colours on the portion of the headlamps, the portion below the visor, part of the lower fairing and the fender/mudguards, as well as tertiary colours on the rims. The rims have a six-spoke split design and are wrapped by medium-profile tyres, with the rear one being wider.

According to the Uptown Riders website, the Double T dominated the motorcycle market until the Bati 800 appeared.

The bike returns in Grand Theft Auto V and Grand Theft Auto Online with the same design as in EFLC, albeit with additional modifications for the bodywork and the exhaust. It also appears with an unknown window tint applied to the visor by default.[1] In the enhanced version, a dedicated dial set is added on the upper plate, which is the same "Sports Bike" set as motorcycles such as the PCJ 600 and the Bati 801.

Colour distribution is the same as before, where the primary colour is applied on most of the body, while the secondary colour is applied on the portion of the headlamps, the portion below the visor, part of the lower fairing and the fender/mudguards. The rims have a dedicated wheel colour, which can be painted by selecting a custom rear wheel, applying a colour and change back to the stock wheel (as it won't reset to the default alloy colour), though with a darker tint/shade. It retains the same 6-spoke split rim design similar to the "Speedway" rims available in Los Santos Customs.

The Double T is, according to the Uptown Riders website, powered by a 900cc inline-4 engine, coupled to a 5-speed gearbox, producing only 170 bhp, making it the least powerful of all six new motorcycles introduced in The Lost and Damned. Its high-revving engine, low-geared box along with poor gear-changing, make this a poor choice for getaways since a cop could easily drag one off it at mid first gear. Acceleration is anything but fun; due to its low-ratio shifting between first and second gears.

The Double T has the theoretical highest "Speed & Weight" value there is in GTA V and GTA Online, weighing in at only 200 Kgs and being capable of reaching some of the highest top speeds. With a few acceleration upgrades, this also makes the bike good for climbing mountains when combined with its wide wheels.

Again, the bike is powered by a 4-cylinder engine and coupled to a 5-speed gearbox. Its engine sounds rather low-revving compared to the one on motorcycles such as the PCJ 600 and the Vader, but emits an additional muffled tone heard on higher engine revolutions.

A Double T in the original version of GTA V. (Rear quarter view) 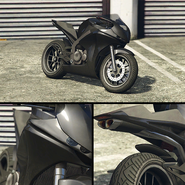 The Double T on the updated Rockstar Games Social Club.

The Double T in a cinematic preview on Rockstar Games Social Club.

The Double T in a cinematic preview on Rockstar Games Social Club.