The station features music from various Italian operas. In 1998, the station was hosted by Sergio Boccino. By 2001, he had been replaced by Morgan Merryweather, who appeared in GTA Liberty City Stories as one of the station's callers.

The station attempts to present an aura of "high-brow, illustrated connoisseurs", though Merryweather's dialogue displays his poor cultural knowledge, through his mentions of "reading Proust in the original Italian" and references to Fellini's "Lolita".

This is the favorite radio station of the Leone Family, Sindacco Family and Forelli Family.

Listed here is the playlist's order in the PS2 version. Translations for the titles, at the side, in superscript.

Alternate version of the Double Clef FM logo from GTA III with the slogan "None of that modern rubbish on Double Clef FM where the songs have words". 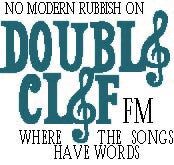 The beta logo for Double Cleff FM that was used in promotional articles.