No
“Because sometimes revenge is a dish best served six times, in quick succession, right between the eyes.”
— Ammu-Nation and Social Club description.

The Double-Action Revolver is a hidden unlockable weapon featured in Grand Theft Auto Online as a promotion for Red Dead Redemption 2. It was added as part of The Doomsday Heist update, but was only available starting from December 15th, 2017 when the event commenced.

The Double-Action Revolver is modeled after a Colt M1892. The weapon is gold-plated with slight floral engravings, and the grip seems to be made out of ivory.

"D.D.P" and "Repeating Arms Co." (the name of an arms manufacturer in Red Dead Redemption II) texts can be seen written on the revolver's grip, just on the upper part of the white grip parts.

The Double-Action Revolver deals 81 damage point per shot, which is high for a pistol, only exceeded (significantly) by the Navy Revolver, Heavy Revolver, its Mk II variant, and the Marksman Pistol. Contrary to the Heavy Revolver, it does not have a damage multiplier on vehicles. It retains its full power up to its maximal range, that is standard for a weapon (120m), along with the Assault SMG, Pistol .50 and the Sniper Rifles.

It shoots much faster than the Heavy Revolver, barely less than 2 shots per seconds (like the Heavy Revolver, the player needs to actually press the trigger once per shot while on foot), giving it the second best raw damage per second of any pistol, second only to the AP Pistol, but retaining 100% of its power with range and suffering less from bullet spread. However, it is outclassed by most automatic weapons.

Aiming down the sights.

A player picking up the revolver from the treasure chest.

The Double-Action Revolver as it appears in Red Dead Redemption II. 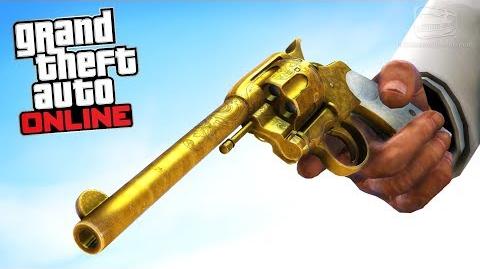 The player will receive a challenge progress reminder when they login into GTA Online.

Get [50-1] headshots with the Double-Action Revolver to unlock a GTA$ reward and an exclusive variation of the revolver in Red Dead Redemption 2.