Dorset Drive, with Mount Zonah on the left and Weazel Dorset on the right.

From west to east, it begins at West Eclipse Boulevard, running through the southwest part of the Los Santos Golf Club, ending at Las Lagunas Boulevard. 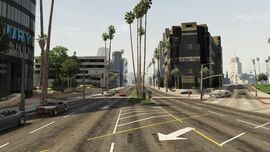 Dorset Drive, as seen from the east, near intersection with Abe Milton Parkway.