Unknown
“Yo, man, y'all want to buy a blender? It's really good. It sort of works.”
— Dope selling Beverly Johnson's blender in Home Coming

Dope is a Grove Street Families member who was turned into a crack dealer/addict by the Ballas, likely by B Dup. The role he played in the gang before is unknown.

He first appears in Home Coming, when Sweet and Carl Johnson arrive back in Grove Street. He approaches them from the Johnson House carrying their blender, and unwittingly asks them if they want to buy it from him. An enraged Sweet attempts to take it back, but Dope is too quick for him and takes off.

His second, and last, appearance is in Beat Down on B Dup, when Sweet and Carl run into him again outside B Dup's former apartment. He informs them that B Dup moved away but doesn't tell them where to. This angers Sweet and causes him to point a Desert Eagle at Dope. Carl defuses the situation and asks Dope calmly, who informs them that B Dup is in Glen Park. The Johnson brothers leave and Dope does not appear again.

Dope has dark brown eyes and a black beard. He wears a green cap, a green hooded top over a white shirt, blue jeans and brown work boots. 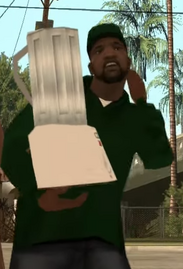