Kyle MacLachlan (GTA III)
Cam Neely (GTA VC)
Will Janowitz (GTA LCS)
“Experience has taught me that a man like you can be loyal for the right price... But groups of men can get greedy.”
— Donald Love to Claude, in Liberator.
“I have some more delicacies about to be served... the liberals would have a field day, of course, but how little they know of life's real pleasures!”
— Donald Love to Toni Cipriani, in Cam-Pain.

Love is the multi-billionaire owner of the Love Media conglomerate and is also involved in the construction industry.

At some point prior to 1986, Love became the protegé of real estate expert Avery Carrington, often following him with a note pad and pen, including to one of Colonel Cortez' parties, and once met Tommy Vercetti, who Avery was hiring to start a gang war between the Cubans and the Haitians. Avery's willingness to use any method to bring down property prices would leave an impression on Love. At some point between 1986 and 1998, he moved to Liberty City and established himself as a businessman, starting the Love Media company, constructing a building in Bedford Point, and opening an import garage.

Donald Love enters the race to become the mayor of Liberty City, following the assassination of incumbent Roger C. Hole, running against Miles O'Donovan. He begins to work for Leone Family Don Salvatore Leone, and uses Toni Cipriani, who assassinated Hole, and uses his wealth to his advantage. Love hires Cipriani to first steal a corpse for Love to eat, before having him campaign for him, and kill some of O'Donovan's campaigners. Love then discovers that the Forelli Family, a rival to the Leone Family who had controlled Hole, own a stake in the company printing the ballot papers, sending Cipriani to destroy the printing factory. Love, realising the voting is closed, decides to campaign himself, but is almost killed by the Forelli Family in an ambush. He is rescued by Cipriani, who later attempts to rig the election.

Love later discovers that O'Donovan has evidence linking him with the Leone Family and sends Toni to destroy the evidence. The links between Love and the Leone Family, however, are too obvious, and the election is won by O'Donovan. Love, having spent all his money on his campaign, is declared bankrupt and forced to move into a flophouse in Pike Creek, Shoreside Vale. Love, however, does not give up and later employs Cipriani to kill his former mentor Avery Carrington to steal his re-development plans for Fort Staunton, killing many Colombian Cartel escorts as well, before killing Liberty Tree reporter Ned Burner, who had witnessed the murder. Cipriani later collects the corpses of both Carrington and Burner for Love to eat.

Donald Love also hires Cipriani to destroy the Fort Staunton district of Staunton Island, a Forelli stronghold, in order to both kill Franco Forelli, as revenge for his previous attempt on his life, which Cipriani does, using explosives provided by 8-Ball, which results in Love being paid a fortune by the Panlantic company to oversee the reconstruction of Fort Staunton. Love, confident of his future success, purchases a mansion in Cedar Grove, and locks himself away, fearing a reprisal from the Colombian Cartel, who attempt to kill him, but they are thwarted by Cipriani, who takes him to his private jet at Francis International Airport, where the bodies of Carrington and Burner are in storage. By 2001, Love's mansion has been seized by the Cartel, whilst Love himself is living at the Love Media headquarters on Staunton Island for "tax reasons".

Donald Love continues to expand his business, also living on a yacht in the Caribbean. [1] He is known to have changed laws, been involved in slum clearance, and opened casinos across the United States, in the process becoming a "legend" according to a Liberty Tree report. He returns to the city in March 2001, following the return of fellow businessman and rival Barry Harcross, and begins to expand his business empire in the city. He re-establishes Love Media and purchases over nine hundred radio stations (including Chatterbox FM, Double Clef FM, Flashback 95.6 and Head Radio), three hundred television stations, four networks, three satellites, ten senators, the Liberty Tree newspaper, the Bitch'n' Dog Food company, and the thirty-story Love Media Building in Bedford Point. He also hires an Old Oriental Gentleman to teach him Tai Chi, sending a private plane to bring him to the city, although the man is arrested by the immigration chief Ray Mathers. At some point between 1998 and 2001, Love begins to implant his plans to redevelop Fort Staunton with the Colombian Cartel and their front company, Panlantic Construction, suggesting he had paid the Cartel off.

Donald Love continues to oversee the development of Fort Staunton and run his media conglomerate from his home in Bedford Point, although his old oriental gentleman is kidnapped by the Cartel, whilst he was being transferred to a police station in Portland View, Portland Island. He later hires Claude, who also escaped in the ambushed convoy, to rescue the old oriental gentleman from a Cartel hide out in Aspatria, before having him kill Yakuza co-leader Kenji Kasen, whilst disguised as a Cartel gangster, in order to provoke a gang war between the two to drive down property prices. Claude is then sent to collect decoy packages, before being sent to collect the real package, eventually going to a construction site in Fort Staunton, where he finds ex-girlfriend and Cartel leader, Catalina, with Miguel, and the package. He retrieves the package for Love and works for him one last time, acting as a decoy to allow the old oriental gentleman to escape with the package. Love later disappears with the old oriental gentleman.

Rockstar Games' official response in 2009 to Donald Love's ambiguous fate was that "No one is quite sure what happened to Donald Love. He certainly crossed a few boundaries and was trying to find a way back to normality. Whether or not he managed this, and what happened to the elderly Asian gentleman are matters we cannot speculate on".[2]

In Grand Theft Auto V, Love is one of the honored celebrities on the Vinewood Walk of Fame, with his star listing him as a "Television Personality". On a Paleto Cove dock, among other locations, the same "Love's Hate Relationship with Taxes" newspaper article of GTA IV is seen, this time with Johnny Klebitz' face on it.

Donald Love is a cannibal, as seen during the mission Cam Pain, where he eats human ribs and describes human flesh as being "like chicken", but "more sentient". He is also known to throw morgue parties, as revealed in both GTA III and GTA Liberty City Stories, even having Toni Cipriani steal the corpses of Avery Carrington and Ned Burner to eat.

He is portrayed as a total hedonist – he believes that everything is for the people, especially for him, showing some arrogance and egocentrism. Love is also known to have a very sociopathic personality, showing no qualms when it comes to eating other people and neither does he show any remorse when it comes to the destruction of Fort Staunton. The only thing that matters to him is his own enjoyment. 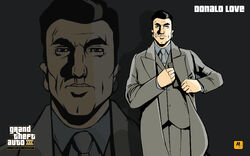 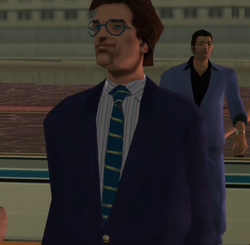 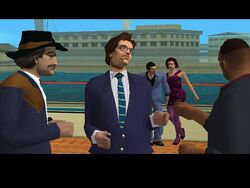 Donald Love during The Party in 1986. 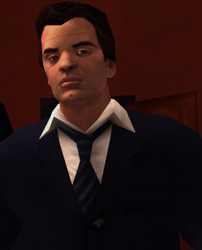 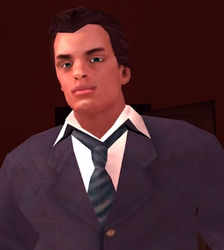 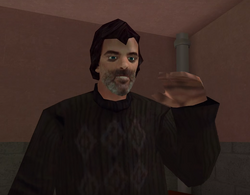 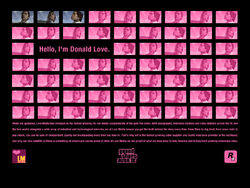 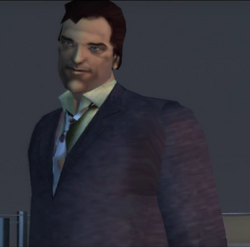 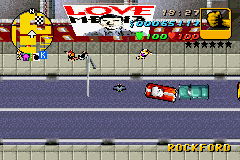 Love Media's ad with Donald's image on it. (Staunton Island) 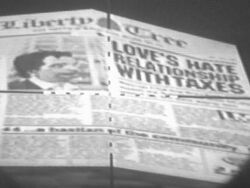 Love's star on the Vinewood Walk of Fame in Grand Theft Auto V.

Donald Love's artwork on a book called The Liberty King.