View source
watch 02:56
Raise a Floppa - The Loop
Do you like this video?
Play Sound
Not to be confused with the Dominator GTT, a classic adaptation of the original Dominator.

dominator3
“Step one: take the best-looking muscle car the 60's ever saw, and introduce it to the greatest American supercar of the modern era. Step two: leave them alone in a quiet garage with a few dozen shots of high octane gas, plenty of axel grease and nothing else to do. Step three: the Dominator GTX is born, and it's hungry. When your pedigree is this damn good, there's nothing wrong with keeping it in the family.”
— Southern San Andreas Super Autos description.

The Vapid Dominator GTX is a muscle car featured in Grand Theft Auto Online as part of the Southern San Andreas Super Sport Series update, released on May 8th, 2018, during the Business Week event.[1]

The Dominator GTX is a modern muscle car that takes strong influences from the 2015-present Ford Mustang, as evidenced by the general profile and rear fascia. The front fascia and tail lights are reminiscent of the seventh generation Dodge Charger, while the front intakes and front skirts are inspired by the 2016-present Chevrolet Camaro ZL1. The rear bumper, stock hood and grille are directly pulled from the Ford Mustang GTT, the exhausts of which can be installed via Los Santos Customs. Some of the car's details take hints from the Saleen 302 Black Label Mustang, particularly the headlights.

Featuring a modernized appearance and aggressive styling, the Dominator GTX is a newer version of the Dominator, retaining the overall shape from the former. The front of the car is largely dominated by the grille on the center and the smaller intakes on the outer edges, followed by a black extender with sharp edges on the front. The upper area is composed of a slanted front with a small grille, while the outer sides are occupied by a set of LED-like headlights, small outer turn signals and inner vertical high-beam strips. The hood adopts a curvature on the front and has two large intakes, as well as the manufacturer emblem. The same hood opens to reveal a large engine with chrome cam covers and a linear strut brace, which bears silver "VAPID" lettering.

The sides denote its sporty nature, featuring long inset area finished in black. An impressed area can be seen running through the doors and towards the vertical intakes, which are located on the rear fenders. The greenhouse area features plastic trim around the windows, as well as black support frames on the rear-view mirrors. Unlike the original Dominator, the vehicle does not have defined B-pillars on the rear-quarter windows. Like the original Dominator, the car has two black details running across the roof area, connected to the front and rear window trims.

The rear of the car follows a similar shape to the standard Dominator, having a curvature on the upper side that juts out of the body and forming a ducktail end. A slanted inset panel can be seen housing various tail light strips, with red strips surrounding the smaller ones and the single reverse strip on the middle. The lower side is predominated by a set of rear vents and a lower diffuser finished in black, also housing the chrome, large-diameter exhausts. The license plate can be seen on the center.

Unlike the original Dominator, the Dominator GTX's interior is shared with the Specter, a more modern and luxurious trim fitting for the vehicle's high-end nature. The Vapid logo can be seen on the horn cap.

Most of the bodywork is painted in a primary color, while the mirrors, handles and interior stitches are painted in a secondary color. Its stock rims are similar to the "Synthetic Z" sport wheels also available in Los Santos Customs, although the area behind the spokes are slightly larger.

The Dominator GTX has an almost polar-opposite performance to that of the regular Dominator; while the regular Dominator is dominant in straight line speed and torque, the GTX emphasizes much more on handling and stability. In fact, the GTX is one of the easiest muscle cars to drive. Its acceleration is average with little to no wheelspin; however, the top speed is painfully slow, lower than that of the Felon, Schafter, and other cars commonly found on the street. Its braking is quite good, and it is faster around a track than the original Dominator, despite the statistics being lower than the original Dominator.

The Dominator GTX has all four advanced flags enabled[2]:

The vehicle is powered by a single-cam V8 engine with a square air filter on top, coupled to a 5-speed gearbox in a front engine, rear wheel drive layout. It shares the same sound as the regular Dominator.

Official screenshot of the Dominator GTX. 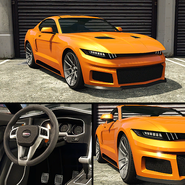 The Dominator GTX on the updated Rockstar Games Social Club.

The Dominator GTX in the cinematic preview on Rockstar Games Social Club. 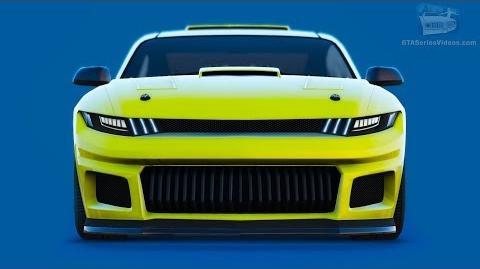