View source
watch 02:52
Roblox: DeepWoken - The Loop
Do you like this video?
Play Sound
Not to be confused with the Dominator GTX, a modern adaptation of the original Dominator.

Standard White - 100%
“You've met the Vapid Dominator, now it's time to meet its maker. And this quinquagenarian is still the hottest piece of muscle on the road. Don't believe us? Just climb inside and let the vibrations do the rest: zero to "Don't stop, Daddy" in 4.76 seconds...”

The Vapid Dominator GTT is a 2-door muscle car featured in Grand Theft Auto Online as part of the Los Santos Tuners update.

The Dominator GTT shares a similar body structure and layout to the Ellie, also being a classic iteration of the Dominator. The front of the car is slanted and features a small silver bumper, dual intakes below and a black splitter/chin spoiler at the bottom, spanning the entire car's width. The area above the bumper is occupied by concave sections, where the central one features silver trim around and houses the grille and the circular high-beam lights, while the outer ones house circular main headlights. The hood area is relatively basic and bears silver lettering on the front that displays the vehicle's name, while the hood hinges from the rear and opens to reveal the engine bay, the latter featuring additional badging on the engine cam covers.

The sides of the vehicle are denoted by the fender flares and the body lines passing through the middle, which almost reach the rear wheel arches. The doors have circular mirrors and horizontal door handles finished in silver, while the front fenders bear "450cui" badges. The cabin area is similar to the Ellie, having black and silver trim around the windows and a slanted rear with small rear-quarter windows and a large rear window.

The rear section consist of a small trunk lid and a ducktail spoiler with the Vapid emblem on the rear center, while the rear end has a black panel with five vertical tail lights that consist of three inner red main/brake lights and two outer red indicators, along with silver lettering on the center displaying the car's name. There is also a silver riveted bumper with circular reverse lights on the outer sides and a central section with the license plate, while the area below the car has two circular exhaust pipes and a visible fuel tank.

The interior of the vehicle is shared with the Gauntlet Classic, sharing the same dial set and details such as the wooden panelling and traditional gear stick. The steering wheel bears the Vapid logo on the center.

The primary color of the car is applied on the bodywork, while the secondary color is applied on the hood and the interior stitching. A trim color is also available for most of the interior, as well as a dial color. It shares the same wheel design as the Ellie, the Sabre Turbo and the Rapid GT Classic, being a derivative of the "Muscle Freak" muscle wheels available in Los Santos Customs, wrapped in medium-profile tires.

The Dominator GTT performs well for its class, having decent speed, excellent acceleration, great traction and adequete braking. The vehicle is also able to perform drifts fairly well. However, the high torque means it may take a while to take off, unless the player slightly presses the accelerator button.

The vehicle features a modeled V8 engine with a single bank of cams on either side of the engine. On the top is a large cylindrical air filter wrapped with red filter paper, which can be replaced with either eight ram pipes or a supercharger. It uses a high-revving engine sound, which is an edited variation of the ones from both the Gauntlet Classic and the Deviant. The badges indicates that the Dominator GTT is powered by a 450cui (7.4L) Supercharged engine. A 4-speed gearbox and a RWD layout come as standard. Similar to vehicles like the Fränken Stange, the Hustler and the Hotring Sabre, the vehicle features fully-animated timing belt and pulleys. 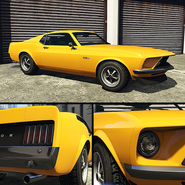 The Dominator GTT in the cinematic preview on Rockstar Games Social Club. 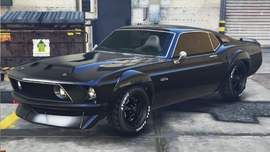