Dolphins are marine mammals found in large water bodies in both GTA Vice City and GTA San Andreas, alongside other marine animals such as sharks, Sea turtles and jellyfish. Being background models in both games, dolphins take no damage when they are shot at by the player, and the player cannot interact with them in any way. However, in Grand Theft Auto: Vice City, the player can kill a dolphin (and any sea creature present in the game, like sea turtles and sharks) by throwing grenades on it. The dolphin model also lacks moving animation, therefore it stays still while swimming.

Dolphins return in the enhanced version of Grand Theft Auto V. Unlike sharks, they never attack the player when swimming in the water. They may however approach the player if they are wearing Scuba gear or controlling a submersible.

Dolphins are one of the animal species the player may experience when consuming a Peyote Plant in GTA V. As part of the continuation of the The Diamond Casino & Resort update, Peyote Plants were also added to Grand Theft Auto Online.

A dolphin in GTA San Andreas 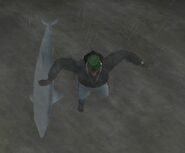 Dolphins in GTA V next gen version seen in the background.