In Grand Theft Auto III, it is mentioned in an article written for the game that Liberty City council has recently upheld a ban on dogs. Despite this, it is possible to hear a dog barking in Hepburn Heights as well, but the dog is never seen whatsoever, as this sound is merely a part of the background ambience noise. Dogs are also mentioned by Marty Chonks, owner of Bitch'n'Dog Food, claiming that the dogs of Liberty City will enjoy "a new flavor".

In Grand Theft Auto Advance, Pat has a dog named Poochie, but he is only mentioned in the game. Also, there is a dog food factory in the Portland View area in this game.

In Grand Theft Auto IV, the sound of dogs barking is a scripted ambience noise in the game, but they can never be seen. Dogs are only mentioned by in-game characters, like Hossan, who has said that he will get a dog, Alex Chilton saying she owns a chihuahua named Valentino, and Kat Williams jokes that he's never seen a dog or cat before in Liberty City. Signs can be found around the city warning dog owners about letting their dogs foul on the street, with a fine of $1000.

If they get separated from their owner in the city or elsewhere, they have been seen to walk back to their original house or any house to sit and wait. A player under attack, if unable to climb or flee, can save himself by beating, immolating or shooting the dog to death. A Stun Gun will neither kill a large dog nor discourage it from attacking, although the beast may be temporarily stunned.

One of the two named dogs in Grand Theft Auto V is Chop, a Rottweiler owned by Lamar Davis. Franklin can engage in several activities with Chop, including walking him and playing fetch with a ball. The second is named Dexie, and owned by Kerry McIntosh. This dog is involved with the mission to retrieve a souvenir from her, in which Trevor chases the dog after it escapes, and steals its collar for the Vinewood-obsessed English tourists Nigel & Mrs. Thornhill.

In the mission Risk Assessment, Franklin comes across a mysterious barking dog in Vinewood Hills, and seems to somehow understand its barking. The dog appears again in Uncalculated Risk, under similar circumstances.

Sometimes, a West Highland Terrier can be seen walking around the cemetery at the Hill Valley Church in Pacific Bluffs. It will stop by a headstone with a bouquet of flowers laid next to it and remain there, presumably visiting the grave of its owner.

The Ballas also own dogs. These dogs will attack the player if the Ballas have been provoked to attack. The dogs will also attack any nearby cops if they engage the Ballas. Canine involvement is particularly known to happen during altercations on Grove Street. Rednecks in Sandy Shores may also own a dog that will attack anyone who attacks its owner. A man will also frequently be seen walking his dog through the Sandy Shores Airfield. Also, it is possible to find Security Guards patrolling a vicinity with a guard dog that will engage the player if he engages the guard or commits a crime in the area.

Dogs of various breeds can often be found by themselves or with their owners along the various beaches in San Andreas, such as those along the north side of Paleto Bay.

In GTA V, there are a total of seven different dog breeds (although five of them are exclusive to the enhanced version), ranging from Rottweilers, Golden Retrievers, Poodles, Border Collies, Huskies, Pugs and Westies. 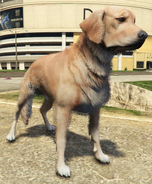 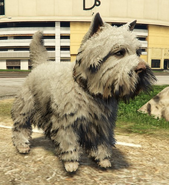 A Pug in the enhanced version.