In-game time
“Is there anybody I hate more than Merryweather's CEO Don Percival? OK, quite a few people. But he's enough of a snake to antagonize just for the hell of it. Merryweather are smuggling in some high-tech weapons. They're currently stashed under a bridge in a shipping container so you'll need a heavy-lift helicopter. See if you can borrow one from the army base?”

Docks to Stock is a mission in Grand Theft Auto Online given to the player by Lester Crest. It is available for up to 4 players. 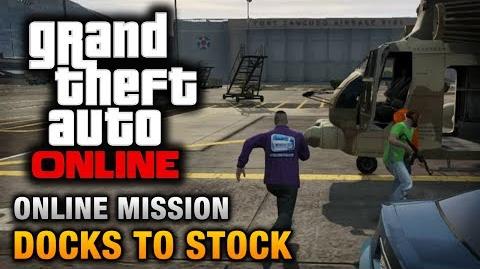