The trailer appears as a twin-axle chassis capable of holding containers. It will always spawn with the container extra, although the extra is removable with modifications, as seen during Scouting the Port. It can appear in numerous colors, but appears to be slightly worn. It is significantly longer than other trailers and gives plenty of room for cornering at the fifth-wheel pivot.

The dock trailer is one of the lightest trailers, thanks to the lightweight chassis, even with the container. As such, it is very springy and bouncy, and can often tipple over onto one side when travelling at speeds. Its male attachment section is very open, meaning cornering is often very practical with this trailer as oppose to other trailers. 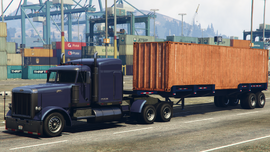 Retrieved from "https://gta.fandom.com/wiki/Dock_Trailer?oldid=1190458"
Community content is available under CC-BY-SA unless otherwise noted.