The Dock Handler is a large forklift truck designed to lift and carry shipping containers. It appears to be based on the Taylor THDC 975, and takes the raised cab design from the HYSTER Top Loader H18-00XM-12EC.

While not fitted with a standard two-pronged forklift arm, it instead has a large overhead magnetic toploader arm which attaches to the tops of shipping containers and then lifts them so they are able to be moved. It is the tallest land vehicle in the game. The vehicle is entered via a suicide door (opens backwards) on the vehicle's left hand side.

As the Dock Handler has only 1 common spawn point, the player will almost always see the vehicle in its first colour, a light gray tone, however multiple finds may see the vehicle spawning in its other available colours, blue and yellow.

Because of its primary use as an industrial vehicle, the Handler is very slow and its heavy weight makes it an unsuitable choice for high-speed driving and maneuvers, due to its rear-wheel steering and wide turning radius. The Handler's high body also makes it unsuitable for freeway driving, as the crane arm will crash into bridges and overhead gantries. It is a front-wheel drive vehicle. 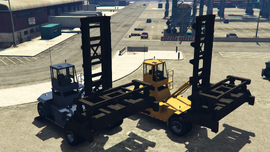