After one week of Tale of Us's residency at a GTA Online Protagonist's new club, Dixon became available to book.

The player can book him for $100,000 from the Resident DJ section of the club management computer.

“Hold on, wait there a sec... I was in the khazi freshening up the pipes... Fucking hell, some little bugger robbed me...That's his bag there...”
— English Dave instructions to the player

English Dave says that he is picking up Dixon from The Richman Hotel and asks the player to collect them there using Tony Prince's Schafter V12.

Upon arrival, Dave is agitated and reveals that while watching the DJ's belongings, he stepped into the bathroom and someone stole Dixon's backpack. Luckily, the apparent thief hurries past right then with the backpack to join his accomplice, who's waiting on a motorcycle. While Dave keeps the unaware Dixon occupied, the player must chase after and take out the thief. Once the thief is killed, the bag can be picked up and returned to the hotel where Dave is waiting with the DJ and the player can then deliver them back to their club.

On the way back to the club, Dave and Dixon bond over a shared love of football and discuss the LS Benders football team.

Dixon is the only DJ who dictates no drugs in the club while he is performing, as the player will find the tables in the VIP Lounge area have their usual joint replaced with normal cigarettes.

Whenever Dixon is resident DJ in the club, his unnamed manager[citation/verification needed] will be present in the DJ booth behind him. 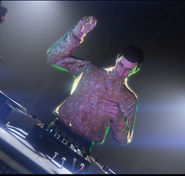 The thief steals the gear.

Dixon arrives at the club.

Handover from Tale of Us.

The start of his residency. 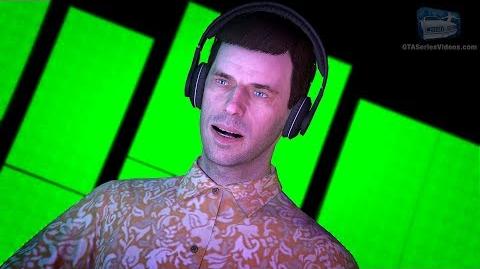