“You still looking for hustles, or you too big time now? This is a big ass hustle. These professional dudes selling weight to the Vagos by the radar array in the desert. They goin' have snipers and heavy cats protecting their stuff, but it'll be worth it if you can handle it. Deal with the shooters, get the package, and bring it back to my spot.”
— Description

Dish the Dirt is a mission in Grand Theft Auto Online given to the player by Gerald. It is available for up to 4 players.

The Vagos are having a cocaine deal with a professional unnamed narcotic crew under the Radio Telescope Array in the Grand Senora Desert. There is a lot of cocaine involved. Gerald is interested in the stuff and orders the team to head there and steal the coke. The narcotic crew is heavily armed with sniper rifles, the team will have to take a good distance and snipe all the gangsters involved. One of the gangsters might escape with the coke in a Cavalcade, so the team will have to chase the gangster by car. Several Vagos will chase after the player who is possessing the drugs, killing them or simply just escaping from them, the team needs to get the drugs to Gerald's apartment. 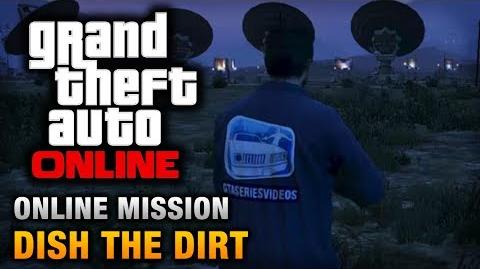