Wasted
Busted
Kim gets away

Jon Gravelli: "Seems some Korean has come into the country and... and is selling money at a discount. You don't need me to tell you that it's all fugazi. Faker than a pair of Vinewood tits."
Niko Bellic: "That's good..."
―Jon Gravelli telling Niko Bellic about the same guy he smuggled.

Dining Out is a mission in Grand Theft Auto IV given to the player by Jon Gravelli.

Niko and Gravelli meet at the hospital again. Gravelli tells Niko about some Korean that moved into the country and sold money at discount. He can be found at Mr. Fuk's Rice Box in Alderney City. Niko goes to the restaurant and tells the attendant that he is Kim's friend, but is not allowed in because "Kim got a lot of money, he don't need no friends." . Niko ignores that and goes in shooting up the place. Niko finds the manager and asks him where Kim is. He tells Niko that Kim is leaving through the kitchen. Niko goes out through the kitchen and kills Kim.

Niko heads over to Mr. Fuk's Rice Box in Alderney.

He heads into the restaurant. The attendant will tell Niko that Kim isn't here, and then attempts to kill Niko if the player walks past him. Niko then kills Kim's goons.

Once all the goons are eliminated, Niko goes into the manager's office. There is a choice here: kill the manager to save time or point a gun at him and threaten him into a conversation. Either way, the game prompts the player to look for Kim in the kitchen. Niko kills more goons and then runs into the kitchen. There will be a small number of goons in the kitchen, Niko takes them out and run after Kim. He will run down the fire escape and try to escape in a car. Jon Gravelli will call after the mission and say that Niko did an amazing job. 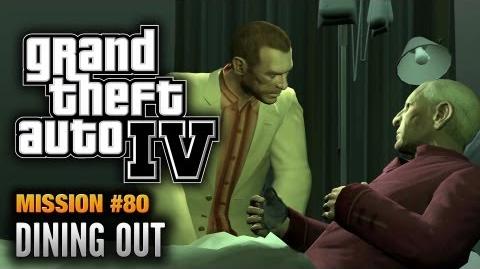