GTA V
dinghy2
“If you like your dinghies like you like your prophylactics then this is the one for you. A lightweight, high capacity rigid-hulled inflatable boat that's good enough for a team of sailors on shore leave.”
— DockTease description.

It is one of the smallest boats in the 3D Universe, with rope textures on the port and starboard sides and capacity for a single occupant, which stands up behind the steering wheel. The Dinghy is normally available in light grey as the primary color, with the cabin compartment, floor and transom/rigid frames painted in a secondary color.

The Dinghy features a large cabin compartment, a small windshield and four seats with steel loops over them, along with ropes on the port and starboard sides, two antenna on the rearmost sections and a protective frame on the stern. The boat may spawn with three different extras:

The Dinghy only spawns in a black color.

In Grand Theft Auto: Chinatown Wars, the design of the Dinghy appears to combine elements from the 3D Universe and GTA IV iterations, with the Android/iOS versions leaning more to the latter. The character also appears to stand up behind the steering wheel.

In Grand Theft Auto V and Grand Theft Auto Online, the Dinghy retains the same design and features as the GTA IV iterations, but adds a pair of headlights on the bow, and the mounted light on the optional rear frame works as a high-beam light. The cabin compartment realistically has two "Truck" analog speedometers, as it has two engines.

The Dinghy is available in two variants:

In GTA V, the player is provided with a scuba gear upon exiting the vehicle.

Designed as a small and light boat, the Dinghy has good acceleration and top speed, and is very maneuverable. Because of its flat bottom reducing friction between the ground and the boat, the Dinghy is perfect for purposely grounding up a beach when in a hurry, as it can easily be pushed back. In fact, that's what it was meant to do, as a lightweight, agile, fast boat that does not need to be properly docked to stay still. Its downside, however, is that it cannot sutain as much damage as other boat, so it is advisable to avoid using it for combat situations.

The Dinghy is powered by two small outboard engines and produces a quieter sound.

The Dinghy remains as one of the best boats for use. While not performing as well as the 3D Universe iteration due to its increased size, it still has good top speed and maneuverability. Its large capacity also allows to carry more allies, being an ideal choice for attacking enemy boats, though it still has a rather weak armor in comparison to other boats.

The Dinghy is powered by two outboard engines and it emits a quieter sound than other boats.

The Dinghy retains its performance traits as in GTA IV, and due to the improved handling physics, the boat seems to be lighter and quicker. It is a good choice for navigating though narrow waterways such as the Vespucci Canals and the Raton Canyon creek. In GTA V, the Dinghy is temporarily equipped with a sonar when required in searching for Submarine Pieces.

Again, the Dinghy is powered by two outboard engines, emitting a quieter sound, slightly more high-revving than in GTA IV. 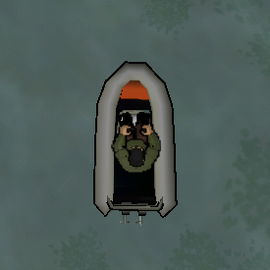 The Dinghy in the Android/iOS versions of Grand Theft Auto: Chinatown Wars.

The 4-seater Dinghy in the cinematic preview on Rockstar Games Social Club.

The 2-seater Dinghy on the updated Rockstar Games Social Club. 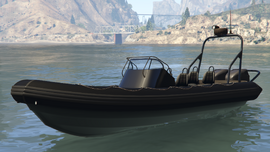 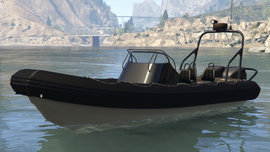