dilettante
dilettante2
“The best hybrid in its class. Includes a nifty dashboard screen with animations showing you how much gas you are saving, while completely ignoring the thousand pounds of toxic batteries on board. Go green!”

— Slogan for the Dilettante.

The Dilettante is a compact four-door liftback that is largely based on the second generation Toyota Prius (NHW20). The headlights are taken from the first generation Citroën C4, while the tail lights are borrowed from the 2002-2007 Buick Rendezvous.

The front of the car is very simple, featuring a wide open section and the license plate on the center of the bumper, as well as a small mesh grille and L-shaped housings with four circular headlights and two small turn signals on either side. The hood is very slanted and has a similar angle to the windshield, bearing the manufacturer emblem just above the grille.

On the sides, the styling is very uniform, with many straight lines flowing throughout the body of the car, uninterrupted. However, the flared wheel arches are very exaggerated, which give the car depth. The cabin area is relatively curved and tall, with the window trims, inner pillars and rear-quarter sections finished in black, as well as the lines separating the roof panel from the rest of the car. A set of rounded mirror shells can be seen near the A-pillars, as well as an aerial on the rear section. The rear window of the trunk compartment door is very slanted, similar to the front windshield.

The rear end of the car bears large tail light units, consisting of triangle-shaped turn signals on the rear quarters, large square-shaped main and brake lights on the middle and a single rectangular reverse light above the license plate area. The same black finish from the sides is seen above the tail light units, while the lower corners of the trunk compartment door bears silver lettering displaying the names of the car and the manufacturer. The rear bumper is relatively bulky and has a black section at the bottom, which houses a wide mesh vent and triangular exhaust tips. The Dilettante is said to have an interior dashboard screen, similar to the real Toyota Prius. However, there is no actual dashboard screen in-game. According to advertisements in GTA IV, a new Dilettante starts at $39,999.

The vehicle is only available in a variety of single-tone colors for the body and the rear-view mirrors. It also uses five-spoke wide rims with small triangular open sections around, wrapped in medium-profile tires.

The Dilettante is equipped with a GPS system with a male voice, but only if the player leaves the "selected cars" (default) option in the audio menu.

For Grand Theft Auto V and Grand Theft Auto Online, the Dilettante retains the same design and features as before, but the rear trunk compartment door bears a single badge on the driver-side lower corner, displaying the manufacturer name. In the enhanced version, it gains a restored interior used on cars like the Taxi and the Police/Sheriff Cruiser.

Again, the car is only seen in a variety of single-tone colors and retains the same five-spoke wide rims and medium-profile tires.

Despite having two sources of power as expected from a hybrid, the Dilettante accelerates very slowly, and transmission choice does not make a difference. It has a top speed which is among the lowest in the game. The Dilettante, due to the dreadful turning radius, understeers at moderate-to-high speeds. The suspension is fairly soft, thus allowing the car to bounce around on rough roads.

The Dilettante is powered by an electric motor and an internal combustion engine at the same time (a V8 engine judging by the cover), coupled with a 5-speed automatic gearbox in a FWD configuration. The engine sound is rather smooth, comparable to the Stratum, the Solair and the Ingot. However, it has an additional tone, likely from the electric motor.

The car in GTA V is noticeably quicker than in GTA IV, with an acceleration rate of about 7,1 seconds to get to 60 mph, and a top speed of 90 mph. It is also more manageable than the Prairie, especially when turning at low to moderate speeds. However, it has considerably weak bodywork, as even low speed crashes can result in major body deformation, and is also severely affected by bullets. As per the majority of vehicles transitioning from GTA IV to GTA V, it is noticeably more rigid.

The Dilettante is powered by an electric motor at under 40 mph (64 km/h), then a V8 internal combustion engine for most of the time, with a single speed (CVT) as standard. The car's combustion engine is also noticeable in terms of sound, with a unique, roary tone.

Note that only the civilian version can be modified. The security version can only be repaired and modified with explosives.

Advertisement of the Dilettante.

Lazlow's Dilettante as seen in the commercial in the Fame or Shame finale.

The Dilettante on the updated Rockstar Games Social Club.

The Dilettante in the cinematic preview on GTA V Rockstar Games Social Club.

The Dilettante in the cinematic preview on GTA Online Rockstar Games Social Club.

The Dilettante (Security) on the updated Rockstar Games Social Club. 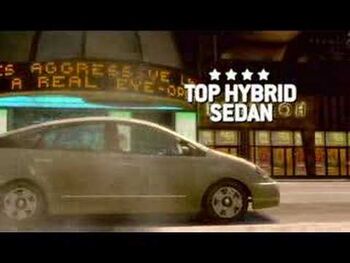 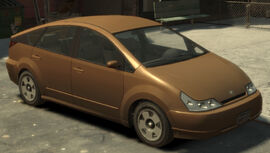 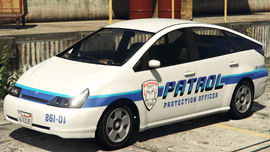