In-game model of the Digiscanner.

The Digiscanner is an object in Grand Theft Auto V.

The detector bears a strong resemblance to the P.K.E. Meter, a device used in the Ghostbusters franchise to detect ghosts. Specifically, it shares many features with the version seen in the Real Ghostbusters animated series (T-shaped antenna at the top with waggling arms, readout with dials and buttons below it, dial(s) on the side), but with a more streamlined, modern appearance.

The detector is a small device with a T-shaped antenna and two sensor wings that move up and down. The detector is implied to be able to locate extraterrestrial entities and objects using radar-like technology. It flashes light blue when it picks up connections to objects, and red when it does not.

The Digiscanner itself is harmless, as does not have any sort of offensive capabilities. Files suggests it has no damage and limited range.

Marnie Allen with the device. 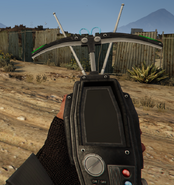 The Digiscanner in first-person view.