“We are leaving and we are never coming back! You are alone, you pathetic psychopath!”

Did Somebody Say Yoga? is a mission in Grand Theft Auto V which protagonist Michael De Santa performs independently.

Michael comes home to watch movies while drinking and smoking, which disgusts Amanda, causing her to throw his cigar in his drink and they talk about Trevor. Fabien LaRouche soon comes in and encourages Michael to join them. Amanda protests, but Michael agrees. Together, the three move outside where Fabien leads Michael through three yoga poses. After these three, Fabien demonstrates a fourth pose with Amanda, one which looks very much like a sexual act. Enraged, Michael attempts to hit Fabien who dodges, causing Michael to fall into the pool. Amanda yells at Michael and she and Fabien leave.

Quite upset, Michael goes to find Jimmy. Jimmy is reluctant to spend time with his dad, but eventually agrees. The two drive to a Burger Shot to pick up some drugs from Jimmy's friend Ahron Ward.[1] The buy goes smoothly, but on their way back home, Michael drinks a soda which turns out to have been drugged by Jimmy. Jimmy forces his father out of the car and drives off while someone off-screen drags Michael away. Michael suffers severe hallucinations, including being surrounded by angry chimps and abducted by aliens before being dropped midair over Los Santos, resulting in a massively multicolored freefall.

When Michael finally wakes, he finds himself in only his underwear. He rushes back home, but finds that his family is not there. In the kitchen, he discovers a note from Amanda explaining that she has had enough of Michael's behavior and that she and the children have moved out. Following the mission, Michael receives a text from Jimmy, who explains he has taken $5,000 from Michael's account.

The mission as seen in the enhanced version trailer.

Amanda in the mission.

Michael drugged and car-jacked by Jimmy

Abducted by a UFO.

Free-falling back to earth. 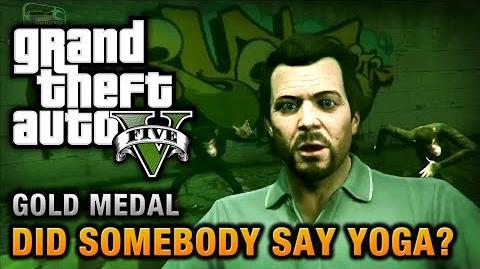 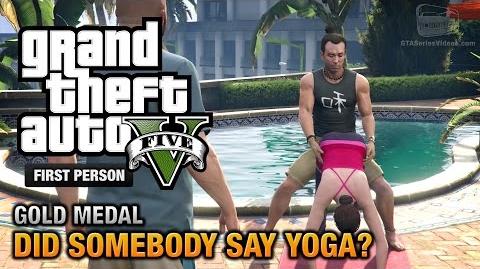 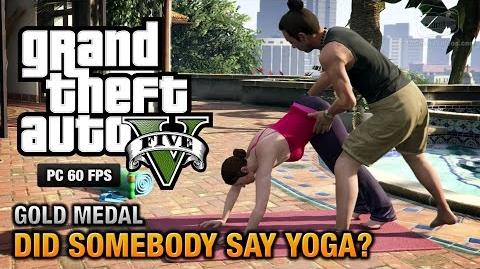 Main article: Did Somebody Say Yoga?/Soundtrack