Diamonds in the Rough

This mission crosses over with Frosting on the Cake.

Diamonds in the Rough

Tony Prince, Luis and Evan Moss buying the diamonds in The Lost and Damned.

In-game time
“I know about some diamonds. Illegal. Never in the system. Easy to move. No insurance. Couple of millions worth. Bought by wise guys, from wise guys, for wise guys. You understand?”
— Ray Boccino

Diamonds in the Rough is a mission in The Lost and Damned and also appears under a different name in The Ballad of Gay Tony. It is the first mission given by Ray Boccino to Johnny Klebitz.

Ashley Butler calls Johnny and tells him that Ray needs his help. Ray explains that Anthony "Gay Tony" Prince, and his bodyguard Luis Fernando Lopez, are gaining some diamonds and he wants them.

After a brief struggle in which Luis notices the bikers and alerts the others, Johnny and a few members proceed to follow a Stretch carrying the diamonds, and instructs another group of Lost members to follow Tony and Luis.

The chase to get the diamonds consists of a Stretch and an Oracle, in which goes from Broker to Algonquin. When the limo stops, one of the passengers will try to escape. He is Gay Tony's boyfriend Evan Moss, who is carrying the diamonds. Johnny kills Evan and picks up the diamonds.

After gaining the diamonds, Ray instructs Johnny to place half of the diamonds in two different trash bags to be "picked up by my boys". Johnny places half of the ice on Hematite Street and the other half on Emerald Street. Occasionally, during the stash, another Oracle appears which are two of Gay Tony's bodyguards, after they are killed the player must store the last of the diamonds.

After completion of the mission, Johnny will call Ashley. She tells Johnny that he won't get paid yet, since Ray needs to sell the diamonds first.

There is no reward for beating the mission, but if Roman's Holiday is completed, Ray will call the player to begin the next mission, Collector's Item.﻿

"Evan Moss, 24, was found murdered in Broker. When, at the age of sixteen, he won the Teen Iron Weightlifting Competition in Arizona, no one could have predicted this violent end. Tragically, his life took a turn for the worse. After positive drug tests, the loss of his weight supplement sponsorship deal, and alleged involvement in a male escort business he hit rock bottom."

"Moss had recently gained public attention as a star of the Liberty City nightclub scene. He was often sited with minor celebrities too drunk to know better at Algonquin hotspot Maisonette 9. It was even rumored that Moss had hooked the biggest whale in the Liberty City Scene - nightclub baron Tony Prince. Mr. Prince would not comment on his friend's untimely death. The LCPD are looking for a group of men wearing tight black leather in connection to the slaying."

"Just when the homosexual community had gained a smatter of respectability by parodying themselves in reality TV shows and sitcoms, they go and ruin it for themselves. The death of Evan Moss, amateur body builder, drug addict and cum receptacle for "Gay" Tony Prince, got himself killed in the most brutal of fashions. This just goes to show that a deviant lifestyle will lead to an unfashionably early arrival at the sodomites' party in Hell. Deputy Mayor, Bryce Dawkins, weighed in on the issue "If America is to remain the moral Christian country I know it is, we need to take the vote away from these people. They can concentrate on picking out wallpaper and leave the choosing of our President to real men."" 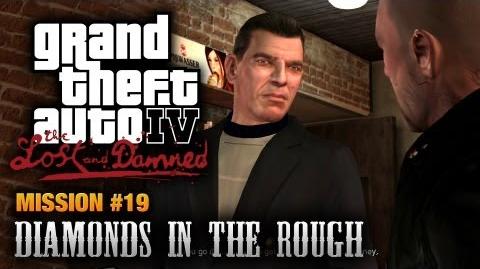 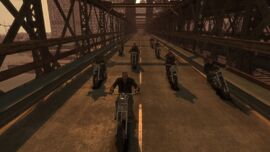 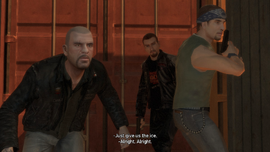 Johnny and The Lost members sneaking into the deal. 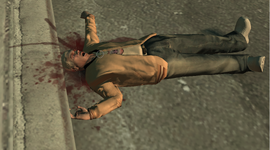