• ­Go to Packie's car in Northwood.

• ­Make your way across to the walkway.

• ­Take down the reinforcements.

• ­Take out the last of Bulgrin's men.

• ­Take Packie back to his Ma's House in Dukes.

"These man, the big faggot and his Dominican bitch, they stole my diamonds. And you have been trying to rob the thieves to rob me. Kill them all!"
― Ray Bulgarin

Diamonds Are a Girl's Best Friend is the final mission for the McReary Family in Grand Theft Auto IV. In this mission, Niko Bellic and Packie McReary arrange a deal on Charge Island to exchange their hostage, Gracie Ancelotti, for a ransom of diamonds. The mission later appears through Luis Lopez's point of view in Ladies Half Price.

Niko meets Packie and Gracie in a car on Frankfort Avenue in Northwood. The trio head to Charge Island, and once there, they meet Tony and Luis. Niko and Packie offer to give Gracie back to her family in exchange for diamonds that Luis stole in an earlier incident. While Gracie is successfully returned to her family, the deal is interrupted (for Niko and Packie only) by Ray Bulgarin, whose men temporarily steal the diamonds. Niko and Packie engage in a prolonged gunfight, but the man with the diamonds throws them onto a passing dump truck out of spite, trusting neither Bulgarin nor Niko and Packie to let him live. Packie kills him, and he and Niko lament that they have no ransom and no reward as they head back to Packie's Ma's house.

Head over to the safehouse on Frankfort Avenue in Northwood. Packie and Gracie are waiting for you in the car. Hop in and drive to the Charge Island Sewage Works.

Drive into the yellow marker at the exchange point, which is an abandoned oil factory. A cutscene shows the deal. The deal becomes botched when Ray Bulgarin steals the diamonds and Luis Fernando Lopez and Anthony Prince escape with Gracie, so basically Packie and Niko lose everything.

Gain cover and shoot Bulgarin's men. There are about a dozen, so take your time. Use a grenade only when Packie is far from the detonation point. Once the nearby men have been wiped out, get closer and ambush the remaining ones. Follow Packie to the hallways above ground. There will be a lot of men on the aboveground hallways so use the pipes as cover.

Packie and Niko will split up with Niko taking the "low road" and Packie taking the "high road." The view will focus on three cars that skid on the ground nearby; use a rocket launcher or a few grenades and blow up the cars before the men can spread out and cause trouble.

Meet back up with Packie and corner the two men with the diamonds. Watch as the men drop the diamonds into a moving Biff dump truck below. Packie curses and draws his gun; help Packie kill the men, then slide down the ladder. Drive Packie to his Mom's house in Meadows Park, Dukes. On the way, Packie will lament the failure of their plan.

On the radio and in The Liberty Tree an article mentions a poor man living in the garbage finding a bag of diamonds, and becomes rich. The man said he was going to Vice City to open a weapons business. However this is ret-conned in The Ballad of Gay Tony where in an updated version of the story states that he found them in the trash in Meadows Park (as seen in the closing cutscene of the mission Departure Time) in Luis' side of the story. 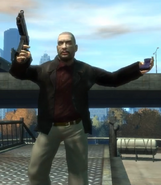 Bulgarin's man holding the diamonds over the side of the catwalk.
Add a photo to this gallery

Retrieved from "https://gta.fandom.com/wiki/Diamonds_Are_a_Girl%27s_Best_Friend?oldid=1164069"
Community content is available under CC-BY-SA unless otherwise noted.