GTA Wiki
Register
Don't have an account?
Sign In
Advertisement
in: GTA IV, The Ballad of Gay Tony, The Lost and Damned,
and 2 more
English

The Diamonds are a plot element featured in Grand Theft Auto IV, The Lost and Damned and The Ballad of Gay Tony where in they are involved in many scenarios also involving the protagonists, Niko Bellic, Johnny Klebitz and Luis Fernando Lopez as well as many others. Detailed below are the many different scenarios that take place involving the diamonds and the different people that gain possession of them each time. The diamonds are the main purpose which led to the Impossible Trinity in GTA IV and Diamonds Forever in TBoGT achievements/trophies. Diamonds also appear in Grand Theft Auto Online, however, no longer as a major plot and they only play a minor role since they only appear in 3 missions.

Sometime before the events of the Grand Theft Auto IV saga, The Cook had stolen the diamonds from Ray Bulgarin. He then smuggled them into Liberty City by hiding them into the batter of a cake he prepared while travelling into the city via ship, the Platypus.

Eventually, Anthony "Gay Tony" Prince, his boyfriend Evan Moss and Luis Fernando Lopez met with The Cook to buy the diamonds. However, Pegorino Family capo Ray Boccino discovered the transaction would take place and sent Johnny Klebitz and other members of The Lost Brotherhood to crash the meet and steal them.

During the deal, Luis noticed Johnny approaching and bundled Tony into a limousine, while shouting to Evan, who was holding the diamonds, to get them to Maisonette 9. Luis and Tony managed to escape, but Johnny managed to catch Evan, killed him and took the diamonds. Johnny followed Ray's orders to hide the jewels in two trash bags, which would later be collected by Niko Bellic, Luca Silvestri, Johnny Barbosa and Joseph DiLeo while disguised as trashmen.

Niko left Luca with the diamonds as instructed, so he could deliver them to Ray. However Luca and his crew plotted to steal them and flee to Las Venturas. Niko found out about their scheme and caught them before they left, killing them all in Middle Park.

Gay Tony got wind of the deal at the Libertonian and sent Luis Lopez to ambush it. During his attack, Luis successfully killed Green and stole the diamonds before escaping. In the shootout that ensued between the Jewish Mob and the Pegorino Family's men, Johnny also managed to escape with Boccino's money.

After he found out that Johnny had betrayed him, Ray sent Niko to kill Johnny's best friend, Jim Fitzgerald, after failing to do so himself. Johnny was simultaneously attacked by numerous groups of Pegorino hitmen, but he nonetheless managed to survive, only to be told that Jim had been killed. Despite his desire for revenge, Johnny was advised by acquaintance; congressman Thomas Stubbs, to stay away from Ray, as Stubbs correctly predicted that Ray would be either be dead or in jail within a month.

Furious over the botched museum deal and convinced that Boccino had set him up, Isaac Roth began threatening Ray with retribution for his perceived betrayal. Preempting this, Ray promptly sent Niko to Roth's base at the Majestic Hotel to finish off Isaac and his associates. After the ensuing bloodbath, Niko refused to do any more work for Ray.

Around the same time as the ambush of the diamond sale at The Libertonian, Luis started working for Ray Bulgarin, who had arrived to the city to find and try to kill Niko Bellic with the aid of Dimitri Rascalov. After learning that Luis and Tony had gotten hold of the diamonds, Bulgarin sent Luis to an ambush at a rooftop, where he found The Cook's severed head and was then attacked by several of Bulgarin's hitmen, forcing him to shoot his way out.

Desperate for a way to recover the diamonds, Boccino came up with an idea after learning that his associates, the McReary Family, had kidnapped Giovanni Ancelotti's daughter, Gracie. Since Luis and Tony were heavily indebted to Ancelotti, the Pegorino Family threatened to have Gracie killed if Ancelotti didn't coerce Luis and Tony into handing over the jewels.

Eventually, Luis and Tony agreed to the hand off and the deal would have gone to plan, if not for the interruption of Bulgarin and his men, who were looking once again to retrieve his diamonds and kill both Luis and Niko. After one of Bulgarin's goons stole the diamonds, Luis, Tony and Gracie quickly fled the scene, but Niko and Packie McReary remained behind and fought to retrieve the stones. When Niko and Packie cornered him, the thug who took the diamonds drops them into a passing garbage truck to ensure that nobody could have them, reasoning that Bulgarin would have later killed him if he was to give them up.

A few weeks later, Luis was walking through Meadows Park to meet with Tony, shortly after killing Bulgarin aboard his private jet. He accidentally bumped into the homeless man Jerry Kapowitz, who fell into a nearby trash can. After apologizing and helping Jerry up, Luis continued on, but Jerry noticed that amongst the spilt trash lay the small pouch of diamonds. He examined them before running off, laughing with glee.

According to a Liberty Tree report, over 100 people contested Jerry and claimed ownership of the diamonds, but Mayor Julio Ochoa finally allowed Jerry to keep the money made from selling them. He later bought a mansion in Alderney, and also planned to move to Vice City and open a gun and liquor store.

The following missions are sorted in chronological order of the timeline. 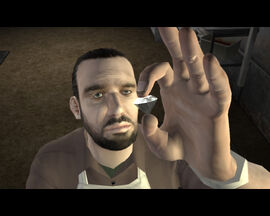 The Cook inspecting one of the diamonds to have been sold during the opening cinematic of Grand Theft Auto IV. The diamonds are being mixed into a cake batter, presumably to be smuggled into the country after being stolen from Ray Bulgarin. 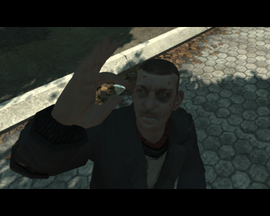 Jerry Kapowitz found a diamond in the trash (TBoGT).