A Diabolus in The Lost and Damned.

Standard White - 100%
For the gang with a similar name, see Diablos, for the car in GTA III, see Diablo Stallion.
“You need to be careful inviting a Diabolus into your life. Sure, it'll provide a swift injection of all the ruggedness and suavity you never had. But before long it'll be wearing your slippers, smoking your slimline cigarettes and conducting a torrid affair with your spouse. And when that happens, Benny has the only solution: a savage reworking into a tightly wound street racer, complete with docked handlebars and track ergonomics. You're welcome.”
— Benny's Original Motor Works description.

The Diabolus is a chopper style motorcycle in The Lost and Damned and a streetfighter in Grand Theft Auto Online, featured as part of the Import/Export update. It is manufactured by Western Motorcycle Company in TLAD and Principe in GTA Online.

The Diabolus is based on a West Coast Choppers El Diablo, given the similar names and general design.

The Diabolus assumes a similar design to the Hellfury, sharing the long front forks and the small headlight, but lacking a front fender and having dual handlebars mounted beside the pivot, along with sharp ends on the caps of the upper plate. The main body features a straighter main frame with a split at the bottom and sharp rear end, the corresponding fuel tank on the front, a mostly-cylindrical oil tank with a pointy shape on the rear and a black leather seat, while the engine features a cone-shaped air filter and dual curved exhausts on the right. The rear section features a large fender with a pillion pad on top, while the main frame mounts a silver buddy bar with a small tail light and the license plate on the end. The rear wheel is mounted directly to the end of the main frame and has the corresponding chain dribe and sprocket on the left.

The bike can be seen with either a thin fuel tank similar to the one found in the Hexer (albeit with lower body extensions and a sharp detail above), or a wide, curved one. The primary color of the bike is applied on the fuel/oil tanks and the rear fender, while the secondary color is applied on the main frame. It uses a set of three-spoke rims with bolt details on the outer surrounding.

The Diabolus is featured in the game's trailer and screen shots, and a beta version exists in the PC version of Grand Theft Auto IV. Unlike the TLAD version, this beta model had a notoriously slim fuel tank seemingly identical to the one from the Hexer, with the bike's name marked on either side. The rear light and the license plate were mounted on the left, while the transmission cover and rims were finished in carbon fibre.

The Diabolus returns to Grand Theft Auto Online with an entirely redesigned power-cruiser design, having a similar design to the 2015 Ducati Diavel, with combination of the 2015 Ducati Streetfighter 848, seen particularly in the front headlight, nose, side bodywork and dual exhausts.

The bike features a front mudguard attached to chrome fork legs, which are mounted within black fork tubes with chrome clamps, along with a small fairing that contain a silver/chrome housing with a single headlamp and two small amber indicators with plastic supports. There is a chrome dual support frame holding the handlebars and long mirrors on either side, along with a "Race Generic" digital display on the centre that is derived from race-type vehicles.

The main section consists of a tubular protective framing and a basic frame around the upper area, a lower fairing and black foot pegs on the lower frontal area, while the upper area is mostly occupied by a large fuel tank with a cap on top and side markings displaying the manufacturer's name. The engine bay has dual chrome exhaust tubes on the right that come from each cylinder block, which merge into a single tube.

The rear section mainly consist of a long tail with a black leather seat on the middle and a wide brake tail lamp on the end. The rear wheel is connected to the rest of the vehicle by a dual-sided swing-arm finished in silver/chrome, having a single suspension spring and a black frame holding the license plate and a main light above. There is a black mudguard above the wheel with a large covering on the left intended to keep the rider away from the chain drive and sprocket, while the right side features black dual exhaust mufflers with chromed tips.

The bike only has access to a single colour, which affects the front mudguard, fairings, fuel tank and part of the rear section. The rims appear to be the same as the "Loops" rims available in Los Santos Customs and wrapped in medium-profile tyres, with the rear one being wider.

The Diabolus, like its twin Hellfury, is an average chopper. Top speed is good and handling is decent, making up for its below average acceleration. Because of its length, cornering at high speed is low, risking the player to slide onto a wall or similar obstacle.

The Diabolus uses a chain-driven, V-twin internal combustion engine with a 5-speed manual transmission, as evidenced by the foot-actuated gear shifter. The engine emits a high-revving, odd-firing noise which sounds to be partially or fully unrestricted, due to the loud noise output and popping sounds coming from the exhaust chamber.

The Diabolus has good acceleration and top speed in comparison to most motorcycles, although it lacks power to match higher-end motorcycles such as the Bati 801 or the Hakuchou. It also has a stable ride and a good turning radius, but because of its weight it is unable to do wheelies or stoppies.

The Diabolus appears to be powered by a parallel-twin engine and coupled to a 6-speed gearbox, sharing the same sound as most sports bikes such as the Nemesis and the Lectro. 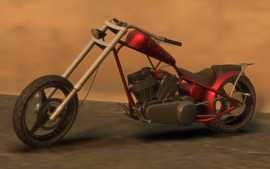 The Diabolus on the Rockstar Games Social Club, pre-2019.