GTA Wiki
Register
Don't have an account?
Sign In
Advertisement
in: Gangs, Gangs in GTA III, Gangs in GTA Advance,
and 3 more
English

View source
watch 02:52
Roblox: DeepWoken - The Loop
Do you like this video?
Play Sound
This article refers to the Diablos as a gang. For the Diablo gang car, see Diablo Stallion. For the chopped motorcycle in The Lost and Damned, see Diabolus.

They are a fairly small gang, and not very well armed. There are two variants of Diablos - one with a red bandana, light blue jeans, and a dark blue jacket, and another one with a blue bandana, a dark blue jacket, and olive cargo pants. The leader of the Diablos is El Burro (who has been under observation by police since 1997, as mentioned in GTA III's official website). The only activities known to be associated with the Diablos are street violence and pornography. They also appear to be having spats with the Uptown Yardies for dissing Queen Lizzy. They lost a lot of members during the attempted Turf War battle with the Leone Crime Family in Hepburn Heights and with the Yakuza for trying to steal some protection money.

The Diablos didn't have a big role in the storyline. They appear in Droppin' Bombs if the player delivers the shipment to the client very fast, 8-Ball will page Mike to steal three Diablo Stallions and bring them to Salvatore's Gentlemen's Club. During this, Mike monologues to himself that he "Better head over to Harwood and get this over quick. The Diablos aren't exactly the type you want holding a grudge against you." Apart from that, their cars appear in some missions, owned by Scorelli, who seems to be affiliated with the Southside Hoods, Cisco and by Vinnie. Hepburn Heights is under control of the Yakuza, while the Diablos reside in Harwood. They can also be found in Liberty Campus and the Cochrane Dam. They are dressed up in yellow jumpsuits and have long red hair (these might be red caps). They appear frequently in rampages and are armed with baseball bats in Portland, but in the later districts, like other gangs, they use Molotov Cocktails, Pistols, Micro SMGs, Shotguns and AK-47s.

Hepburn Heights is now completely under Diablos' control. Different as in GTA Liberty City Stories, they are poorly armed and use only baseball bats (fire guns in missions only). At the beginning of the game they are involved with prostitution businesses by some rival Luigi's pimps. Later on, Claude starts working for the Diablos' leader El Burro, the Diablos never appear in one of the missions. After Claude moves to Staunton Island, Claude starts working for the arch-rival Yardies and their leader King Courtney. In the mission Uzi Rider, Claude and two Yardies members went to Hepburn Heights and committed a massacre on the Diablos via drive-by, the Diablos become hostile to Claude. They still steal protection money from the Yakuza and Claude needs to get this money back, as depicted in the mission Shima.

The favourite radio stations of the Diablos is The Liberty Jam in GTA Liberty City Stories, Game Radio and Head Radio in GTA III. 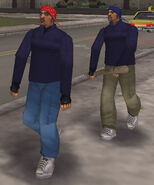 The "Diablo" in GTA Advance. 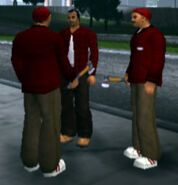 The early alpha version of the Diablos

The beta version of the Diablos.

The only appearance of the Diablos in Staunton Island during the mission Shima. 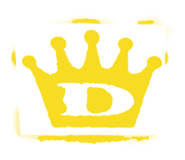 Graffiti of the Diablos Gang's logo

Members of the Diablos in GTA Advance.