"Why? Because they have things nobody else has, because they can afford it, because frankly I'm rich enough to do whatever the fuck I want, and you're poor enough not to ask me any Goddamn stupid questions. Now, I mean that as a friend. Namaste."
―Devin Weston to Franklin Clinton in I Fought the Law...

He is an influential billionaire and a business tycoon operating in San Andreas and runs various businesses.

Weston is an American billionaire, venture capitalist, and investor who owns shares in several major companies, from hotel chains like Banner Hotel & Spa to alcohol manufacturers like Patriot Beer and Nogo Vodka; but most importantly, he is a major shareholder of Merryweather Security, a private military company that acts as the muscle of his various corporate and criminal interests. He is also shown to have influence within law enforcement, as evidenced by his relationship with FIB agent Steve Haines and his ability to procure a police escort for his lawyer and second-in-command, Molly Schultz.

Michael and Trevor first meet Weston after he has had a meeting with his friend and cohort, Steve Haines, during the mission By The Book, where he was given permission to torture Ferdinand Kerimov. However, they are not properly introduced until after they rob an armored truck for him at the behest of Haines. Weston offers the trio special business opportunities: He offers Michael the possibility of making a movie with his idol, Vinewood producer Solomon Richards, in order to raise the value of Richards' studio and he offers Trevor and Franklin Clinton a contract to steal five luxury cars for him so he can sell them to high ranking Chinese government officials.

Trevor and Franklin acquire the five cars, with the assistance of Lamar Davis, and transport them to Weston's drop-off point, but Weston backs out on their payment, promising to "invest" it for them on his own company. Simultaneously, he attempts to shut down the production of Michael and Solomon's movie so that he can claim an insurance pay out since the studio has achieved its probable peak value. Since the insurance policy requires the inability to complete the film, he has his lawyer, Molly Schultz, take the print copy of the film with her on her trip to Liberty City and keep it stashed until Weston sees fit to destroy it. Upon discovering this, Michael races to the airport to recover the prints from Molly, but when she sees him coming, she becomes terrified and attempts to flee, only to accidentally end up getting killed when she is sucked into a plane's turbines.

Enraged by Molly's death, Weston sends a platoon of Merryweather soldiers to Michael's home in an attempt to murder his wife and daughter. Alerted of this by Weston's gloating at the premiere for Meltdown, Michael and his son, Jimmy, rush to their home and arrive just in time to save Amanda and Tracey.

"He has betrayed everyone he's ever known. He's got you involved with the federal government, and he's messed up several business ventures of mine. He has got to go. And you know what? I'd like to say this isn't personal, but it is personal."
― Weston ordering Franklin to kill Michael.

After his failure to have Michael's family killed, Weston visits Franklin and tells him to kill Michael, but Franklin tries to refuse, telling him that Agent Haines told him to kill Trevor. It is at this point that Franklin can choose whether to kill Michael at Weston's request, kill Trevor at Haines' request, or spare them and team up with them both to kill all their enemies.

If Franklin chooses to kill Trevor, he kills Trevor with Michael's assistance. Afterwards, Franklin calls Haines to inform him that he has done as requested and also to ask him to persuade Weston not to go after him for sparing Michael. Haines tells Franklin that he will handle Weston, because Merryweather has lost its licence to operate in the state, but also tells him never to contact him again.

If Franklin chooses to kill Michael, Franklin will kill Michael at Weston's behest. After the deed is done, Franklin will call Weston and inform him of this, asking him to ensure that Steve Haines will not come after him for refusing to kill Trevor. Weston informs Franklin that he has already contacted Haines' superiors and ensured that he would back down. Franklin also asks if Weston has any more jobs for him, but the billionaire sardonically tells Franklin that he did do his last job for him, and tells him he is no further use to him and mockingly telling Franklin to "go to business school, because clown school hasn't been working out so far for him."

If Franklin chooses the "Deathwish" ending, Weston gets kidnapped by Trevor after the protagonists have killed Haines, Wei Cheng and Stretch. Trevor stuffs Weston into the trunk of his own car and drives it to the edge of a cliff in Blaine County, where he meets up with Michael and Franklin. After gloating about their victory to a terrified Weston, the three protagonists push the car off the edge of the cliff. The car crashes repeatedly into several rocks along the way, until it finally hits the shallow waters and explodes, killing Weston.

"You paid a private company to do your dirty work for you. Then you underpaid that company because you thought you were big enough and bad enough that you didn't have to play by the rules."
— Michael describing Weston.

Weston is considerably pompous, egotistical, narcissistic, arrogant, and over-the-top. He enjoys constantly reminding the protagonists that he is far wealthier than they are, and that his affluence allows him to do as he pleases; he even brags about his sexual conquests, both on his website and his Lifeinvader page. Along with that, he has a rather sadistic and cynical sense of humor, joking around and making crude jokes at others' expense. All the protagonists at some point or another agree that Weston can best be described as a douchebag: overbearing, prone to showing-off and with the irritating habit of pretending that he is their friend, despite his absolute scorn for them.

It is very obvious that it has been a long time since he has not had everything he wanted handed to him, to the point that it does not even occur to him that anyone would actually stand up to him, and when they do he responds with temper tantrums. This can be seem in the Deathwish ending, when Weston starts screaming and crying "I never lose" after he fails to bribe Trevor into not killing him.

However, it is implied by the "Deathwish" ending that while Weston may have many connections, he is not well-liked, even hated, at least by most of his associates and acquaintances, since none of the protagonists ever face repercussions for their obvious role in his death. His death, if not a convenience to the people he claimed connected to, is at least not a negative impact on their lives and businesses. The police and FIB list him as "missing" when his body is not found, and Merryweather CEO Don Percival emails Michael and Trevor thanking them for killing Weston as it allowed him to buy Weston's shares in the company at a reduced price, making him a lot of money in the process.

He gives the appearance of living a healthy life and a clear, peaceful mindset by practicing yoga (even having his Lifeinvader profile picture in a namaste greeting pose), but in reality he uses this image in a passive aggressive stance, still looking down at others. Even Molly, the only person in the game who genuinely likes Weston, is treated with disdain by him, with him dismissively labelling her as "highly-strung". However, her death does anger Weston, but only to the extent that Michael "made a fool" of him.

Weston, according to Trevor, "fancies himself a liberal" and thus engages in several stereotypical "upper class liberal" activities, such as practicing yoga and drinking fancy lattes. However, it becomes clear during the game that these supposed liberal sensitivities are only a ruse to maintain a positive public image. When Lester discovers that Weston owns 11% of Merryweather Security, he will comment on how "good" it is that a "pseudo-liberal" like Weston would be a shareholder in a private military corporation. However, Weston proclaims that he thinks like a libertarian, stating on his website, "Vote Conservative, Live Liberal." Weston himself states that he is a Darwinist--an obvious opposite to his peaceful, positive, liberal image.

Weston also has the habit of calling any of the protagonists by the moniker "slick," which he uses alternately to pretend he is their friend or to belittle them, as the situation sees fit. This is likely a reference to the character of Michael Cerrito from the 1995 movie Heat. 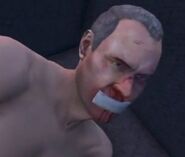 Weston in the trunk of his own car during The Third Way.
Add a photo to this gallery

Retrieved from "https://gta.fandom.com/wiki/Devin_Weston?oldid=1172021"
Community content is available under CC-BY-SA unless otherwise noted.