Standard White - 100%
“It wasn't as beautifully proportioned as the Sabre, or as fast as the Dominator, but that didn't matter - in the 70's, the real connoisseurs of muscle were all about the Deviant. Well now the dark horse is all grown up, and thanks to Team Schyster's ground-breaking remodeling this tricked-out, wild-eyed stallion is all set to put a hoof through your skull at the first opportunity.”

The Schyster Deviant is a muscle car featured in Grand Theft Auto Online as part of the continuation of the Arena War update, released on February 7, 2019, during the Deviant Week event.

The Deviant is based on Ringbrothers' Javelin AMX Defiant, itself a customized 1972 AMC Javelin. The taillights, grille and lower grille seem to resemble the ones found in the 1970 Plymouth Barracuda.

The Deviant is distinguished by the elongated body and the sporty modifications installed on. On the front, the lower area features a colored chin spoiler partially covered by a black, plastic-like splitter, both spanning the whole width of the car. On the upper area, the car has a large grille with a separation on the middle, while the circular panels on the edges house the twin circular headlights and small rectangular turning signals. The hood sports a bulky section with a small cutout on the front, intended for thea front intake. A silver manufacturer emblem can be seen just in front of the small intake.

The sides of the car are denoted by the discreet fender flares around the wheels, as well as dual exit vents on the front fenders and the dual side-mounted exhausts on the rear ones, just next to the rear wheels. The greenhouse area makes use of a permanent black section around the windshield and door windows, with squared rear-view mirror wings near the A-pillars.

The rear section features a large trunk with a large ducktail spoiler on the end, with four strakes on the concave portion of the same. The car features a black panel that houses the tail lights and the license plate, along with silver lettering above the driver-side tail light set, displaying the manufacturer name. On the underside, a black detail spans the entire width of the car and features two concave portions, apparently to support rear-exit exhaust options.

The interior of the car is reused from the Savestra, using the same dials and details for the dashboard. It uses race seats with red safety belts.

The primary color of the vehicle is applied on the bodywork and the lower front chin spoiler, while the secondary color is applied on the portion surrounding the front, the headlight housings, the chin spoiler beams hidden behind the black splitter, the engine cam covers, the door handles, the rear bumper and the interior stitching, along with the trimmings found around the windows, the rear-view mirrors, the rear plate and the tail lights. A trim color is also available for the seats. The rims appear to be identical to the ones from the Savestra, being a variation of the "Fujiwara" tuner rims available in Los Santos Customs. The rims can also support a dedicated color, although only examples generated in the Content Creator, or the one appearing in the mission Repo - Sasquashed may have a black color.

Statistically, the Deviant handles like any other muscle car, but its heaviness makes it difficult for it to oversteer easily. Handling-wise, it is not quite punishing and can be corrected in an event of a spin-out, and can easily tackle hard corners with handbrake usage. Its speed is great and is quite a competitive vehicle for races. In addition, it can take on collisions relatively easy due to its heavy weight and having a good amount of durability; while the Deviant can be given full suspension upgrades, it does not make much difference in terms of corners. One point to take note of is its very poor turning radius at low speeds, which can make sharp hairpins difficult.

The Deviant is powered by a single-cam V8 coupled to a 4-speed gearbox in a front engine, rear wheel drive layout. Part of the engine bay is occupied by an intake manifold connected to the aforementioned intake, and a supercharger fitted as standard. The engine sound seems to be an edited version of the Imperator and Dominator ones, slightly higher-pitched. 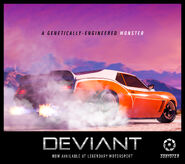 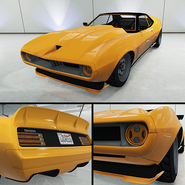 The Deviant on Legendary Motorsport.

The Deviant on the updated Rockstar Games Social Club.

The Deviant in the cinematic preview on Rockstar Games Social Club. 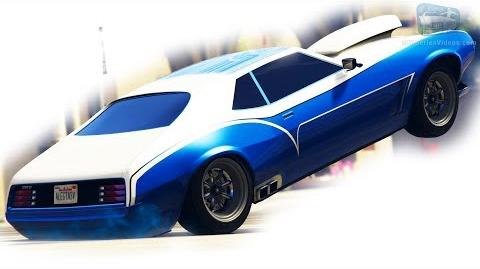