Standard White - 100%
“It began as little more than a myth: a list of impossible statistics circulating on the dark net. Then the myth became a legend: a few leaked photographs so provocative that possession was a federal crime. Then the legend became a rumor: a car so exclusive no one could confirm it existed in the real world. And now, thanks to you, that rumor is about to become a very messy headline.”
— Legendary Motorsport description.

The Principe Deveste Eight is an ultra hypercar featured in Grand Theft Auto Online as part of the continuation of the Arena War update, released on February 21, 2019, during the Deveste Eight and Doomsday Week event.

Both in name and in design, the Deveste Eight is clearly based on the real-life Devel Sixteen, a Dubai based concept hypercar. The shape of the headlights seems to be inspired by the Hyundai N 2025 Vision Gran Turismo. Opposed to the butterfly doors from its real-life equivalent, the Deveste Eight uses gull-wing doors.

The Deveste Eight is clearly distinguished by its smooth design with various exotic curves around it. The front end is largely dominated by the dual carbon-fibre splitters on either side and large open ducts, along with dual mesh intakes that curve upwards and having plastic surroundings. Within each intake, there is a set of carbon-fibre curved housings with circular headlamps on the upper side and numerous light strips spanning most of the housing, down to almost the centre of the car. The bonnet area smoothly contorts inward and bears a golden Principe emblem on the front end, along with frontal ducts with plastic finish and rear exit vents within inset sections of the bonnet, intended to direct air to flow through the bonnet and passing on each side of the windscreen.

The sides of the car are distinctive by the protruding front arches and the upswept body shape, which reaches to the top of the rear wheel area before curving downwards on the rear end. Large concave sections can be seen coming from small front exit vents and reaching towards large mesh intakes intended to direct airflow into the rear brakes and the engine bay. The cabin area is distinctively rounded and long, featuring black trim around the windows, gull-wing doors with sleek mirror wings and rear-quarter inset panels with small vents, intended to direct airflow into the engine bay. The rear section has a large rounded window with plastic trim for the cabin, and a narrow, triangle-shaped glass pane with black trim, intended for visibility of the engine. The central narrow area is relatively flat in comparison to the sides and features six slatted vents beside the rear glass pane.

The rear of the car is very unique, with the most prominent feature being the two enormous cylindrical openings that house the exhausts of the vehicle. Large triangle-shaped vents can be seen between the openings and the rear fender arches, containing V-shaped red tail lamps partially surrounding the outer part of the vents. The name ‘Deveste’ and ‘Eight’ is badged in gold on both the right and left rear vents, along with a small Principe logo onto the lower-middle section of the rear, between the openings. The vehicle’s rear splitters curve round and back into the body, and is also where the vehicle’s brake and reverse lamps are located, including an F1-style brake lamp on the centre. Its underside is fully covered with a carbon-fibre plate, with the front section having a small separation from the front splitters and the rear one having various separations for the rear splitters, including a wide central separation.

The interior is similar to that of the X80 Proto, except for the paddle shifters on the steering wheel and the Principe badge on the horn cap.

Most of its bodywork is painted in a primary colour, while the rear-view mirrors and the interior stitching are painted in a secondary colour. A trim colour is also available for the dashboard, part of the door panels, seats and engine cover. The car uses a unique set of rims, consisting of 14 spokes and having bolt details on the outer surrounding, wrapped in low-profile tyres. These rims can also support a dedicated colour, although only naturally-generated examples from Content Creator may have a black colour instead of the default alloy colour.

The Deveste Eight has overall moderate acceleration but an excellent top speed. It features a long wheel base, and, when coupled with its average traction, means that the vehicle loses time to grippier Supers in races with many corners. Its straight line speed is excellent; it tops out as the second fastest car in the Supers class, only behind the 811. Despite this, it is only the 4th fastest regular car in the game, as both the Pariah and Itali RSX in the Sports class are faster than it and any of the Supers. As a result, it is one of the best Supers in the game for Stunt Races; in a regular race consisting of actual corners, the Deveste Eight will almost always be beaten by cars with good cornering capabilities, such as the Emerus or Krieger.

Though the Deveste Eight has excellent durability, it is extremely vulnerable to gunfire from behind, as it can be destroyed easily by shooting its huge exhausts with the Minigun or any vehicle that can be equipped with machine guns. The large rear windows mean the driver and passenger can be exposed to enemy gunfire.

While the engine bay itself cannot be opened, a unique V16 engine can be partially seen through the glass hood, and by clipping the Rockstar Editor camera inside of it, one can see four turbochargers on either side of the engine like its real-life inspiration. It also has a mixed engine sound similar to both the X80 Proto and Vagner. 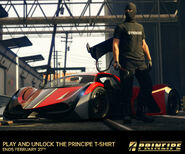 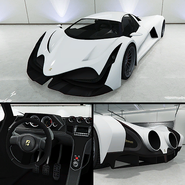 The Deveste Eight on Legendary Motorsport.

The Deveste Eight on the updated Rockstar Games Social Club.

The Deveste Eight in the Cinematic preview on Rockstar Games Social Club. 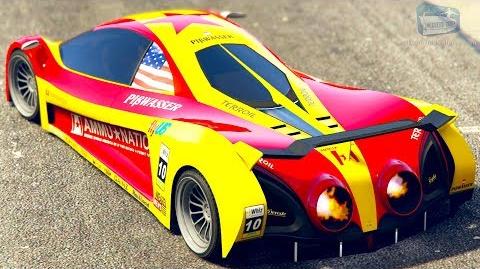