Out of lives
Moonbeam destroyed
Out of time

Cash and RP vary depending on difficulty and time spent.

In-game time
“Hey, you know how there's a time when in every story about a leader taking power when they gotta, like you know, take out everybody against them? Well, sometimes even disappointed wannabe-ass leaders who ain't ever going to take power got to do that shit too... 'cause otherwise they'll get killed along with everybody else they ever knew.”

Desperate Times Call For... is a mission in Grand Theft Auto Online, and is the seventh mission given by Lamar Davis to the GTA Online Protagonist in the GTA Online: Lowriders update.

“Get the heat off Lamar's back by taking out all of the Ballas OGs and Vagos shot callers making plans against him.” 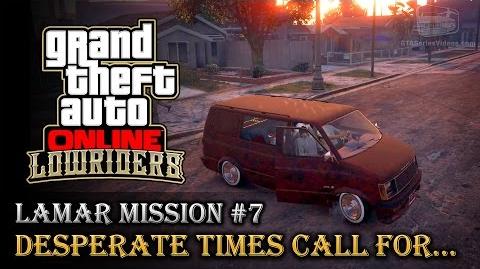