Standard White - 100%
“Disaster zones, urban riots, civil wars - they make for some affordable vacations and some edgy snapmatic albums, but they can be awkward to traverse. Luckily for you and everyone on the receiving end of your sepia-tinted filter, the Desert Raid is here to make craters, rubble and the bodies of the innocent feel like a giant red carpet.”

The Vapid Desert Raid is an off-road trophy truck featured in Grand Theft Auto Online as part of the Cunning Stunts update.

The truck seems to be primarily based on the Red Bull SMG Buggy, with which it shares its basic shape, as well as its front and rear light units, and the large air intakes on the roof and directly behind the side windows, while the front arches are very similar to Jesse James' Trophy Truck which was driven at Goodwood Festival of Speed. The spare wheel compartment is similar to the one featured on many popular trophy trucks, including the Ford Ranger T6 Rally Raid, which also uses a converted rear bed.

The Desert Raid features a bulky, yet aerodynamic body, where the front has a very thin design with no obvious signs of a front bumper, although there is still the inclusion of a manufacturer badge on the hood, as well as two rectangular headlights. The hood shape follows the sharp raised arches, also covering the truck's large V8 engine, surrounded by the roll-caging.

The cabin area is fully enclosed with glass panes, being relatively thinner in comparison to the rest of the car, while each side of the vehicle has side-mounted, aluminium exhausts which run almost under the doors. The windshield features a sponsor banner by default, which cannot be removed. On the roof, a large intake can be seen leading into the rear bed of the vehicle, into the rear radiator which features two radiator fans. A roll cage is partially seen through the windows.

The rear area of the vehicle is very bulky, featuring extended wide body panels, with small intakes on the side of the body directly after the cabin. The rear of the vehicle serves as a storage unit for two spare wheels, which are seen held by green ratchet straps down onto the framework. The rear features basic rectangular lights at either side of the vehicle, on the ends of the wide-body panels and above a set of bkack mudguards. On top of these panels are multiple vents designed to divert airflow for aerodynamic purposes.

The underside of the vehicle uses quad-shock absorbers on each axle, dampening impact to its extreme ride height, together with springs with internal shocks and additional hydraulic shocks. The front axle is protected by a diff cover formed from the underside sump guard, as well as protective layers on the A-frame suspension. The rear axle sports semi-elliptical leaf springs and additional hinged shock absorbers running from the chassis to the axle itself.

The interior reuses gauges from the Liberator and Marshall, as well as includes a very similar internal rollcage. Like the Trophy Truck, the Desert Raid includes many switches and buttons across the interior, and features a knob reading F/R, likely indicating a rear/four wheel drive locking diff. The steering wheel itself includes multiple buttons, and directly behind that are two paddles for an apparent semi-automatic paddle-shift gearbox. A large extended gear-shifter is centralized between the carbon-fiber racing seats. Also, a radio is seen located under the carbon-fiber dashboard.

The vehicle's bodywork, tubular frames, engine cam covers and the stitches on the steering wheel are painted in a primary color, while the roof intake is painted in a secondary color. Although not accessible, a tertiary color is applied on the cage paddings, which is only available in black upon purchasing it, and are only painted in the corresponding color sets available in Content Creator. It uses a set of five-spoke rims similar to the "Ruff Weld" sport rims available in Los Santos Customs, wrapped in Atomic high-profile, all-terrain radial tires with detailed tread patterns. Both the stock wheel rims and the spare wheel rims on the rear end are painted with the "Wheel" color.

Both liveries have the same sponsors, although a few of them are present on a single livery, not present on the other:

* Denotes the sponsors located on the windshield banner.

The vehicle is similar in performance to its trophy counterpart, having excellent suspension as a main feature. It also has great acceleration, but not as impressive as the Trophy Truck. The truck has good traction thanks to its all wheel drive layout, as well as the off-road tires it sports. The large shock absorbers and raised suspension give the truck a large amount of leeway without resulting in damage to the vehicle when landing from jumps, giving it more potential than other off-road trucks with raised suspension. The vehicle also feels light thanks to the lack of extra bodywork, but the large rear makes the vehicle very prone to fishtail, similar to the Trophy Truck. Its resistance to collisions is generally good, but may lose body part and the spare tires in the process (though not as many parts as the Trophy Truck due to the unique construction).

The engine sounds to be turbocharged, and appears to be a large V8 with two square air-filters centralized on the block. The valve covers can be seen colored along with the roll-cage color. Two exhausts are seen coming from the engine, running down the side of the vehicle. In front of the engine, a large radiator with radiator fans is seen, placed directly in front of the camshaft cogs. The engine has a single cam configuration. 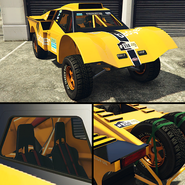 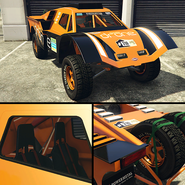 The Desert Raid on the updated Rockstar Games Social Club.

The Desert Raid in the cinematic preview on Rockstar Games Social Club.