View source
watch 02:56
Raise a Floppa - The Loop
Do you like this video?
Play Sound
For the Grand Theft Auto V weapon sharing the same name with the GTA IV iteration, see Combat Pistol.

In GTA V and GTA Online, the weapon is manufactured by Hawk & Little. It is a bonus to those who have either the Special/Collector's Edition, or for all players owning the Enhanced Edition. In the former case it is free, while in the latter case it costs in-game money to purchase. However, the players who bought the Special/Collector's edition of the original game will still get it for free.

The Desert Eagle takes the form of its real counterpart in Grand Theft Auto: San Andreas and it is referred to as such in it. It is modeled after the .50 AE caliber version and holds seven rounds per magazine.

The weapon also appears in some cutscenes of Grand Theft Auto: Vice City, but it is never available in normal gameplay.

Refered as the Combat Pistol, the Grand Theft Auto IV rendition is still modeled after the .50 variant of the Desert Eagle (as evidenced by the lack of a fluted barrel) and features a more detailed appearance. It is obviously a bit larger than the Pistol and features a slightly longer barrel. The Combat Pistol holds nine rounds per magazine, suggesting that it is intended to be the .357 Magnum version.

Refered as the Pistol .50, the Grand Theft Auto V and Grand Theft Auto Online retains the form of the Desert Eagle, but with a multitude of changes made to the design: besides the removal of the famous "Beaver Tail", the slide-mounted safety has been removed, the frame mounted slide release is missing, the cocking serrations on the gun are chunkier, an underbarrel rail has been added, the barrel lock has been omitted, a sliding safety has been added in place of the slide release and the trigger guard has been redesigned. In addition, the muzzle has been shifted downwards towards the middle of the barrel, and is noticeably larger in diameter.

It has tritium-illuminated iron sights (like the Pistol and Combat Pistol) that are based on other modern pistols such as the FN Five-seven.

The Desert Eagle in Grand Theft Auto: San Andreas is basically more powerful than the Pistol, but holds less rounds than the former in a single magazine, resulting in a constant reloading when used. It takes 2 body shots with poor skill level; if one's skill is gangster or hitman level they can kill non-armored NPCs in one shot and two for armored NPCs.

In Grand Theft Auto IV, the Combat Pistol is more powerful than the standard Pistol, but sacrifices ammunition capacity for it, holding only nine rounds in the magazine as opposed to seventeen rounds for the Pistol. While it can be used for drive-bys, its semi-automatic capabilities and the 9-round magazine makes it hard to use at neutralizing targets in car chases, meaning that it is at its best in gunfights on foot.

The Desert Eagle takes about 3-4 shots to an unarmored NPC in the body to kill them. The Combat Pistol in GTA IV has a much higher fire rate than the GTA San Andreas rendition (it is the same as the Glock), which would be rather impractical in real life due to its heavy recoil.

The Pistol .50 has very high damage per shot of pistols, at the cost a slightly reduced, semi-automatic rate of fire coupled with notable recoil. Capacity is lower than that of the Pistol but it can be freely improved to be on par with it. The Pistol .50 lacks the damage falloff of the Pistol and Combat Pistol, increasing its usefulness at medium range. The main weakness of the Pistol .50 is its accuracy, which makes it ineffective for drive-by shooting and of reduced efficiency at a long distance while on foot. However, this handgun remains effective against NPCs in close quarters, making it a viable pistol for use in hectic battles.

True to its name and the markings, it is chambered in .50 Caliber, which is a very large and powerful cartridge that gives the pistol such power.

In Grand Theft Auto Online, the properties of the Pistol .50 make it a good weapon for quickly finishing the first waves of a Survival, as a single shot to the chest is able to kill enemies at lower survival waves.

Ricardo Diaz holding his Desert Eagle in the cutscene of Supply & Demand.

Niko Bellic with a Combat Pistol.

Franklin holding a Pistol .50 in a beta screenshot; Note the weapon's different color compared to the one from the final game. 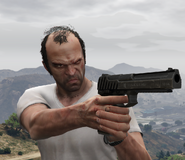 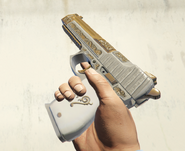