Advertisements for the company are seen all over Liberty City, most prominently in Star Junction. It is featured in the in-game website www.peepthatshit.com under the "High Fashion" shopping section. Citizens of Liberty City can sometimes be seen wearing Derriere attire. Jeremy St. Ives can be seen wearing a black Derriere shirt on the show The Men's Room. Male pedestrians may be found wearing Derriere polos by the beach.

The store's name comes from the word derrière, meaning a person's buttocks. The logo itself is a giant buttock, separated by a crack in the middle. Interestingly enough, when first glanced at, the logo bears somewhat of a resemblance to both the Christian Dior and Coco Chanel logos. Judging by the name, however, the brand itself is likely based on Victoria's Secret.

An advertisement for Derriere seen around Liberty City, especially in Star Junction. 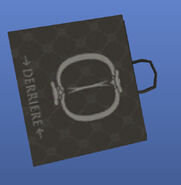 Derriere shopping bag.
Add a photo to this gallery
Retrieved from "https://gta.fandom.com/wiki/Derriere?oldid=1184767"
Community content is available under CC-BY-SA unless otherwise noted.