He appears during The Paleto Score as he is the first unit to respond to the Blaine County Savings Bank alarm, arriving in a Sheriff Cruiser with another officer to check what has happened with the alarm, assuming it to be a false alarm. When he realizes there is a real robbery, he takes cover behind the car (frightened by Trevor Philips) and calls for support with the radio.

Later, with all the reinforcements covering the entrance, he speaks through a Loudhailer warning the robbers and trying to reach an agreement. However, as Trevor and the crew appear with the Juggernaut suits and the Minigun he gets shocked and says his last words. He can be killed during the mission but it is not required.

Whether he is killed in the Paleto Score or not, random NPC models with the Kirkman name badge will continue to spawn at Paleto Bay Sheriff's Office and the female deputy at Sandy Shores Sheriff's Station can also spawn as "Kirkman".

His name and status as an officer of the law is a reference to Robert Kirkman, the writer of The Walking Dead, and this is further confirmed by the other named deputy having the name Grimes (after Rick Grimes from the comic and TV show). 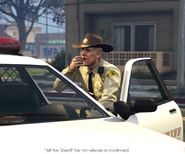 Appearance in The Paleto Score. 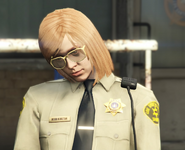 Female deputy at Sandy Shores with the name badge Kirkman.
Add a photo to this gallery

Retrieved from "https://gta.fandom.com/wiki/Deputy_Kirkman?oldid=1237468"
Community content is available under CC-BY-SA unless otherwise noted.