GTA Wiki
Register
Don't have an account?
Sign In
Advertisement
in: Missions, Missions in The Ballad of Gay Tony, End Missions
English

Luis destroys one of the heroin filled duck-shaped bins.

Luis: "You're a pill-popping old queen, man. I'm a murdering maniac. But we survived, bro...we survived."
Tony: "We did more than survive, amigo. We prospered. We took on this town and we won. We took on this place and we gave it the fucking finger. Fuck you all! I don't care what people say. Tony Prince and Luis Lopez could not be stopped!"
―Luis and Tony after Ray Bulgarin's death

Departure Time is the final storyline mission in The Ballad of Gay Tony, given to Luis Lopez by Tony Prince.

Luis and Tony have a heated argument in Tony's Apartment over Luis contemplating killing Tony on the orders of Rocco Pelosi and Uncle Vince. However, since Luis killed Vince instead, both the Bulgarin Family and the Ancelotti Family are pursuing Tony. After the argument, Luis and Tony agree that they must confront and defeat Ray Bulgarin over at Funland in Hove Beach, Broker, and also destroy the Heroin he has stashed there. Luis and Tony drive there, and Luis tells Tony— who cannot return home or to the clubs for his own safety — to wait by the Monoglobe in Dukes for a few hours. Luis promises to meet Tony there if he survives. Tony leaves for the Monoglobe and a short cutscene plays where Timur comments on Dimitri Rascalov's death, before the player regains control of Luis.

Luis makes his way through the park and destroys four duck-shaped bins containing heroin whilst at the same time killing Ray Bulgarin's guards.

After destroying the bins, Luis discovers that Ray is not in the park. Luis heads to the east side of the park, killing any pursuing guards, and destroys the final bin. After the last bin has been destroyed, Timur arrives with backup and explains to Luis that Bulgarin is at the airport and is heading back to Europe in his private jet. Luis kills Timur before he has a chance to escape, and steals a Bati Custom parked outside the park, which he uses to ride to the airport.

Luis rides to the airport via the Broker-Dukes Expressway. Along the way, Yusuf Amir calls and Luis explains the situation. Yusuf offers to help, but Luis declines. However, upon reaching the Expressway, Yusuf appears in his gold Buzzard. Luis follows Yusuf, who destroys any pursuing Russian vehicles with homing missiles.

After reaching the airport, Yusuf wishes Luis luck and departs. Luis drives onto the runway and sees Bulgarin's jet preparing to take off. The plane's doors open and one of Bulgarin's guards begins shooting at Luis. Luis kills the guard and jumps on the plane's doors before they close. After killing the last of Bulgarin's bodyguards, Bulgarin emerges from the cockpit holding a grenade. Bulgarin threatens to activate the grenade if Luis shoots him, but Luis claims he will "take his chances". Luis executes Bulgarin, who drops the grenade. The pin comes out of the grenade and becomes live, which destroys the jet in mid-air. Luis survives and collects a parachute, and jumps out of the jet before it crashes into the sea. Luis parachutes back to Liberty City. When he reaches land, he meets Tony at the Monoglobe.

Upon arriving, a cutscene plays showing a homeless man walking the street looking for food. Luis bumps into him, which knocks over a bin. Luis helps the man to his feet and walks off, after which the homeless man finds a bag containing Bulgarin's diamonds in the bin. He then walks away laughing with joy.

Tony meets Luis, where the duo make amends. Tony reflects on how he squandered his ambition to see the world by going to Algonquin, where '...the world came to me.' Luis still remains a little cynical, amused that the two men have become so close considering their vastly differing personalities. Yusuf arrives and congratulates the duo for "winning", later mentioning that he wants to franchise the clubs. Tony points out that his clubs are more about the people than the style, before Yusuf replies that Tony should "Whip out your dick and piss all over them!". The three men walk away, which ends the game.

Complete the mission in under 10:00
Take less than 50% damage
Kill 25 enemies via headshots
Have 70% Accuracy 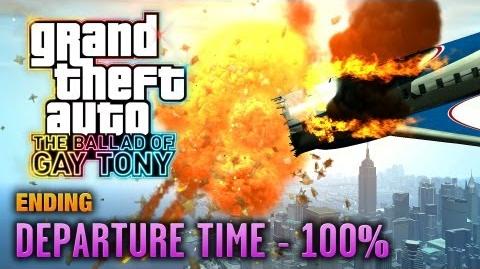 "Liberty City experienced one of its most violent days in recent memory after a series of shootouts raged across the city. Gunfire was first reported at the Funland carnival, in Hove Beach. Then a major incident followed at Francis International Airport before a private jet belonging to Ray Bulgarin, a Russian businessman, crashed, killing all on board."

Another photo as Luis chases the jet

Luis jumps aboard Bulgarin's jet just before it takes off

Luis takes out Bulgarin's men aboard his plane

Luis about to parachute off the exploding jet

Luis descends towards The Monoglobe where Tony is waiting for him

Yusuf, Tony and Luis all celebrate their victory over Bulgarin