"You know you always been like this, boy... I say left, you say right. I say become a doctor, you say become a patient."
―Denise Clinton to Franklin Clinton in Hood Safari.

Denise is Franklin Clinton's maternal aunt. At the start of GTA V, she and Franklin live in a house in Strawberry, but the two have a tense and occasionally volatile relationship. Denise views Franklin as lacking ambition, and wants him to move out. She often refers to him as the one mistake her sister ever made. Franklin for his part looks down on her for her shoddy housekeeping and nonsensical feminist views.

She identifies herself as a "new age feminist" and holds feminist group meetings at the house, frequently badmouthing Franklin in front of her friends when she gets the chance. She is seen on multiple occasions leading "spirit walks" with her friends, which involves chanting feminist phrases during cardio exercise. Her brand of spiritual feminism is sex-obsessed; the yoga routines she and her friends do involve orgiastic moans, and much of her 'philosophy' is about the importance of pelvic strength.

After Franklin moves into the Vinewood Hills house bought for him by Lester Crest, she prevents her nephew from entering the old house despite the fact that he is still legally the co-owner. She later turns the old house into a women's center, despite Franklin's disapproval.

Denise makes her last appearance in the opening cutscene of Fresh Meat, leading a group of women on a march whilst chanting feminist slogans before Trevor Philips tells them to be quiet.

Beta version of Denise next to Lamar Davis. 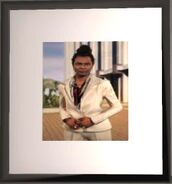 A portrait of Denise found inside Franklin's Mansion.

Denise sitting on the sofa.

Artwork of Denise Clinton.
Add a photo to this gallery

Retrieved from "https://gta.fandom.com/wiki/Denise_Clinton?oldid=1164393"
Community content is available under CC-BY-SA unless otherwise noted.