View source
watch 01:10
What is the Deluxo?
Do you like this video?
Play Sound

Standard White - 100%
“The future is here, and it has gull-wing doors. Never again must you choose between the drama of the open road and the majesty of flight. Never again will you feel that lurch of panic as you accidentally drive over a cliff. At the click of a button, you will soar over trees, mountains, sharks, the slack-jawed competition, and anything else you choose.
Please note: this vehicle can be modified at a Vehicle Workshop inside an Avenger or Mobile Operations Center.
”
— Warstock Cache & Carry description.

The Deluxo is based on the DeLorean DMC-12, although various differences may be noted, including tail lights more reminiscent of Ferrari's dual circular tail lights from many of its 1970s and 1980s models, headlights and body shape similar to those of a Renault Alpine GTA/A610, and a wider spectrum of body colors. The Deluxo also resembles an 1980-91 Audi Quattro, and like the Quattro, it also has a front-engine, all-wheel drive drivetrain. There also appears to be resemblances of the 1990-94 Volkswagen Corrado, particularly the shape.

The Deluxo is easily distinguished by its compact design, featuring a small splitter and a central intake below a black front bumper, while the area above it has rectangular headlights and silver details on the sloped center. The sides have flared arches and a slanted rear section, with triangle-shaped rear quarter windows. The rear has a black section with four circular lights and the same silver details as the front. Two exhaust pipes can be seen below the rear bumper.

The car always spawns with a spoiler and four different colors applied on the entire body.

“These cars are Deluxos, and there's four of them: gull-wing doors, solid steel body panels, iconic 80's American design, perfect for our designs after a few modifications.”
— Avon Hertz, during the preparation mission "Deluxos"

The Deluxo returns with a design much closer to the DeLorean DMC-12, but having slight styling modifications similar to the Lancia Montecarlo. The wedge shape of the front is similar to the first generation Isuzu Piazza, while the styling of the front fascia is derived from the 1987-88 Pontiac 6000 and the rear end features tail lights similar to those of the Nissan 300ZX (Z31). The vehicle gains the ability to fly, making it similar to its fictional iteration from the Back to the Future series, the DeLorean time machine, though lacking the characteristic devices on the rear.

The car retains the overall body shape and features from the 3D Universe rendition, but is narrower and flatter in overall profile. The front features a black/plastic section at the bottom with a wide mesh intake in the center, spanning most of the car's width and having two horizontal and three vertical elements. On the bumper area, there is black/plastic detail spanning the whole bumper's width, and a set of two amber square turn lights on the outer edges, which leave a small plastic section on the outer sides. The upper area is flat and features a small grille with two horizontal elements and the corresponsing badges, as well as two rectangular headlights. The hood area has small lines that are aligned with the grille's width and lead towards the windshield area. Said hood hinges from the front and opens to reveal a small luggage compartment inside.

On the sides, the car uses black/plastic details that continue from the front end and run through the sides, only leaving gaps around the slightly-protruding wheel arches, together with a black/plastic skirting area and black rectangular door handles. The greenhouse area follows the same sloped rear shape as the 3D Universe rendition, though it makes use of butterfly doors with a unique hydraulic sound when opened. A set of black/plastic mirror wings can be seen near the A-pillars of the vehicle, along with a glass hatch on the rear.

The rear of the car features a black panel containing the silver badges and a license plate, as well as a set of tail lights consisting of one main/brake unit on the upper side and turning/reverse units on the lower side, separated by black horizontal detail. The lower area is occupied by a flat rear bumper with various vented details and a black extender, while the two exhaust pipes and the muffler can be seen below.

The interior of the car uses a large dial cluster in a similar way to cars such as the Turismo Classic and Cheetah Classic. However, it uses a black background with a green grid-like pattern for the main dials and the small gauges, with the warning lights displayed on squared details. The dashboard also has two rectangular aircon units on the edges and a horizontal vented unit in the center, while the radio set is visible on the central console. The inner portions of the seats and the central section where the handbrake is seen have unique red/green striped textures passing over. The steering wheel bears the Imponte logo. Interestingly, the Deluxo is stated in the files to use the same dials and part of the interior textures from the Sentinel Classic, a sports car which was released later.

The car has the ability to switch between car mode and hover/fly mode, which can be transitioned at any time. It features various functional components that do not seem to have fully-rendered storage spaces inside the vehicle; they merely disappear into the car's bodywork when stowed. When transitioning from car to hover/fly mode, the wheels fold up and a rear hatch opens to reveal multiple square-shaped thrusters for forward propulsion, while thrust heat can be seen coming from the wheel wells. When pushed upwards, four small wings are deployed from the front extender and the side skirts before bending upwards to form winglets, intended to provide lift. When transitioning back to car mode, all of the hovering components are stored back and the wheels are lined up again.

The primary color of the car is applied to the bodywork, while the secondary color is applied to the upper portions of the front and rear ends. A trim color is also available for the interior. It uses a set of wire rims resembling the ones from the DeLorean DMC-12, with the rear wheels being larger.

The vehicle can be equipped with a set of machine guns and missile launchers, which will be located on the outer sections of the lower front intake. 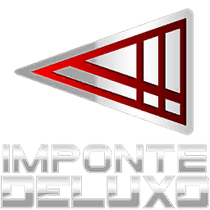 The Deluxo, like its real-life inspiration, is a rear-engine vehicle, powering the rear wheels through a 4-speed gearbox. However, by clipping the Rockstar Editor camera through the rear section, it does not have a model. The engine sound is shared with cars like the Buccaneer and the Nightshade.

As stated before, the car is able to switch into a hover/flyer mode, which lifts the car above the ground.

The hovercraft mode not only allows the vehicle to traverse terrain easily, but allows the player to travel over water. The Deluxo can also turn (or rather, spin) with next to no space needed, allowing it to make maneuvers such as doubling back to escape enemies easily. In this state, however, contrary to what one might expect, it is actually slower than in car mode, only reaching about 80mph according to the dashboard's speedometer. It is also less controllable, therefore being prone at fishtailing on turns. If the player leaves the Deluxo while in hover mode, the wheels will fold back down and the vehicle will return to car mode. This action can be avoided by bailing out of the car while it is in motion (including spinning on the spot), which will result in the car remaining in hover mode. This technique also allows the Deluxo to remain above water if the player wishes to exit it while hovering over a body of water, as the car will otherwise sink and be destroyed if the player leaves it while above water.

When pushed upwards, the car transitions into flyer mode, being an ideal choice to avoid enemies on ground and cruise around easily, but while in flight, the car moves much slower (slightly slower than a Cargobob). Should the player bail out of a flying Deluxo, the vehicle will behave in a similar manner to a moving car, coming gradually to a stop. It will then slowly descend towards the ground and transition into hovercraft mode upon landing, allowing the player to retrieve it. Unlike most aircraft, the Deluxo does not automatically provide the occupants with parachutes, therefore requiring them to be acquired elsewhere in order to safely bail out of it while in the air.

It should be noted that if the car is flipped over while in hovercraft/flyer mode, it will go back to car mode. This may cause the car to get stuck over certain areas.

The Deluxo can be modified with a set of driver-operated weapons:

The Deluxo is able to be customized in Los Santos Customs and other mod shops, although the weapons are only accessed via the corresponding vehicle workshop from a Mobile Operations Center or Avenger. 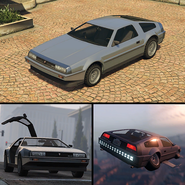 The Deluxo on the updated Rockstar Games Social Club.

The Deluxo in the cinematic preview on Rockstar Games Social Club. 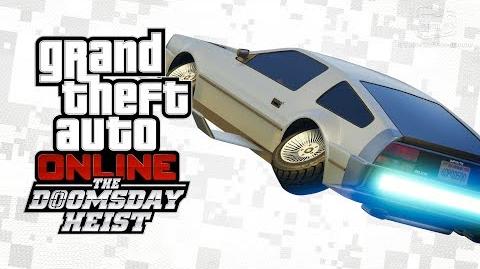