The store in GTA Chinatown Wars.

The store can be found in Tinconderoga Avenue, East Island City, Dukes. Unfortunately, food cannot be bought from these businesses and the store its inaccessible to the player.

In Grand Theft Auto: Chinatown Wars, it is revealed that the store is under protection of the Spanish Lords. During a mission, Huang Lee burns the store using molotov cocktails, on orders from his uncle Wu "Kenny" Lee.

After this mission, the shop remains destroyed, and its interior can be seen through a hole in the store's rooftop, however, the store will still inaccessible to the player. 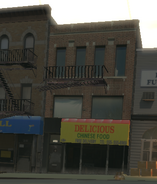 Huang about to throw a molotov cocktail into the store.

The store destroyed.
Add a photo to this gallery
Retrieved from "https://gta.fandom.com/wiki/Delicious_Chinese_Food?oldid=1144513"
Community content is available under CC-BY-SA unless otherwise noted.