GTA Wiki
Register
Don't have an account?
Sign In
Advertisement
in: Landmarks, Locations, Locations in GTA V,
and 3 more
English

Del Perro Pier is, as its name suggests, located in Del Perro, Los Santos. It is mainly accessed through Red Desert Avenue. Del Perro Pier is renowned for its bright, vivid colors that shine at night, giving the surrounding beaches a sort of vibe.

The pier is home to many attractions. At the end of the pier is a viewing area where one can look at the Pacific Ocean through a Telescope. Throughout the pier, there are several different restaurants and shops, including a parking lot on the pier itself. Towards the centre of the Del Perro Pier is an amusement park known as Pleasure Pier. It is most well-known for its ferris wheel and roller coaster that emit bright flashing lights at night (which the player can ride). There are also vending machines nearby that help replenish the player's health.

Due to the pier's popularity, the player should expect to see many pedestrians roaming about. They can be seen driving up to the pier, taking a walk, leaning over the rails, or watching the performers. Retreating to the pier with a wanted level leads to a dead end. A good tip to survive a firefight is to take cover in the bathrooms in the amusement park.

It is closely modelled after the Santa Monica Pier[1].

After saving his family from an onslaught of Merryweather agents sent in by Devin Weston to kill his family, Michael is later seen at Del Perro Pier, talking to Lester Crest about the events that had transpired at his home, and that he had told his wife and children to move out of the house for a few days for the sake of their safety. Lester tells Michael that Merryweather nor Devin Weston are short on excuses to kill him. He then questions Michael if this event changes his opinion on raiding the Union Depository, to which Michael immediately disagrees, and demands that they should get going on with doing the Big Score right away before things get hot.

Later in the game, if Franklin chooses Option C, then the mission requires Trevor to hunt down and kill Steve Haines, who is on the Ferris wheel broadcasting his TV show. Killing Steve immediately gains a wanted level.

Further Adventures in Finance and Felony

Unknown building adjacent to The Big Puffa Seafood. Based on the Carousel Building on the Santa Monica Pier in California[2].(Night view)

Rear of the unknown building.(Night view)

Del Perro Pier Visitor's Center. Based on the StarLine Tours kiosk at the Santa Monica Pier in California[3].(Night view)

Entrance from the pier parking lot.

Pier office at the end of the pier. Based on the Harbor Office on the Santa Monica Pier in California[4].(Night view)

Rear of the pier office.(Night view)

Underside of the pier.

Rules of the pier.

Del Perro Pier seen from above in the opening title sequence of Grand Theft Auto V.

Lightning strikes down above the Del Perro Pier during a thunderstorm.

One of the Del Perro Pier ferris wheel's many colors at night. 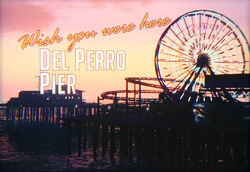 A postcard of Del Perro Pier.