Standard White - 100%
“The Deity is no ordinary luxury saloon. It manifests that killer combo of handsome, tech smart and immensely powerful. Remind you of anyone? Install exclusive modifications at the Agency Vehicle Workshop.”
— Legendary Motorsport description.

The Enus Deity is a luxury four-door sedan featured in Grand Theft Auto Online as part of The Contract update.

The Deity is the four-door version of the Paragon R, appearing to resemble the third generation Bentley Flying Spur. The taillights may be inspired by the first generation Rolls-Royce Ghost, but much bulkier similar to that of the 2008-2012 Maserati Quattroporte V (M139).

The vehicle shares most of its design and features from the Paragon R, but has a four-door layout, longer wheelbase and various differences. On the front fascia, the car has a similar intake layout as the aforementioned car, but the central intake is much larger and there are dual separations on the outer intakes that are finished in black/CFRP, while the bottom is predominated by a painted splitter/trim that spans up to the front wheel arches. The upper area features a similar grille and headlamp positioning to the Paragon R, but the grille is mostly rectangular in shape and the sections beside it are more curved, with a slightly narrower distance between each headlamp units. The bonnet is largely identical in shape to the one from its two-door counterpart, but is flat on the centre and lacks an intake.

On the sides, the car has smaller vents on the front fenders and use rectangular skirts with a black detail on them, while the bodywork uses similar body lines compared to the Paragon R. However, the lines around the rear section do not reach towards the bottom and have a smoother curvature, in contrast to the straighter lines on its two-door counterpart. The glasshouse area is obviously larger and slightly taller than on the aforementioned vehicle, with chrome trims around the side windows and black separations on the centre, as well as a black roof. The rear-view mirrors are also larger than those of the Paragon R, with their lower halves finished in black.

The rear section denotes an apparent difference compared to the Paragon R, featuring a wide boot lid with an inset area on the lower portion and using the corresponding "ENUS" badging on the centre. The tail lamps on the outer edges consist of outer red main units, inner red brake units and a white outline between both units, with their inner edges working as the reverse units and the rest as the indicator units. The bumper area has a dedicated section for the number plate and a protruding section at the bottom, which has a narrow open ridge on the centre and two larger openings for the dual-exit, dual exhaust tubes.

The interior of the vehicle is a four-door variation of the one used in the Paragon R and its armoured variant, with the same dial set from the aforementioned vehicles, the 8F Drafter and the Gauntlet Hellfire. The manufacturer emblem is located on the horn cap.

The primary colour of the vehicle is applied on the bodywork, while the secondary one is applied on the upper halves of the mirror shells and the interior stitching. A trim colour is also available for the dashboard, steering wheel, doors and seats. It shares the same wheel design as the Paragon R, being split five-spoke rims with bolts around the centre and wrapped in low-profile tyres.

The vehicle shares the same engine model as the Paragon R and its armoured variant, being reminiscent of the Flying Spur's W12 engine (also similar to the real-life iteration of the Paragon R). Said engine is coupled to an 8-speed gearbox in a front engine, rear wheel drive layout, and shares the same sound with the aforementioned vehicles, the Baller LE and its variants, and the Windsor and its four door, convertible variant.

The Deity, along with selected vehicles from the same update, can be modified with a Remote Control Unit, which allows to drive the vehicle remotely, similar to the RC Bandito and the Invade and Persuade Tank. Note that the camera is always set to first-person view, and cannot be kept if the Missile Lock-on Jammer is installed.

When the Armor Plating upgrade is equipped, the vehicle adds armour paddings on the sides in a similar manner to the Paragon R (Armored) and the armoured vehicles featured in the Executives and Other Criminals update. However, it gives a much higher resistance to explosives in general. It also has bullet-resistant windows, which are able to withstand 15 rounds from most firearms before being shattered.

The Deity, along with selected vehicles from the same update, can be modified with a Missile Lock-on Jammer, which prevents the lock-on system of the Homing Launcher and other weaponized vehicles to target onto it. Note that it cannot be kept if the Remote Control Unit is installed. 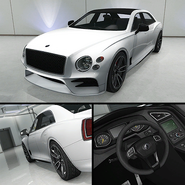 The Deity on Legendary Motorsport.

The Deity in the cinematic preview on Rockstar Games Social Club.