Standard White - 100%
“A light and nimble streetfighter. With acceleration like this, you’ll be popping a wheelie straight onto the judge’s desk and mooning the jury in no time.”
— Career Builder description.
“Spending time and money converting your sports bike into a streetfighter is like waiting for the passage of time and manual labor to put rips in your jeans - who would bother when that kind of rugged authenticity is available for instant purchase at a wildly inflated price? Just hit that button to double your credibility, guaranteed.”
— Southern San Andreas Super Autos description.

The Shitzu Defiler is a sports bike featured in Grand Theft Auto Online as part of the Bikers update.

The Defiler is seemingly based on the Suzuki Bandit 1200 Streetfighter, sharing the tall grille column and raised rear fairing.

The bike features a lightweight body similar to the Akuma, featuring a front mudguard attached to the front wheel by black frames, as well as a shield-shaped fairing with two small circular headlamps, in a stacked positioning. The upper plate holds two independent handlebars on either side and the "Sports Bike" analog dials with a digital display on the centre, shared with most sports bikes. There is also a single narrow rear-view mirror attached to the left handlebar.

The main body features a tall grille column, the main frame, small panels around the engine bay. a large fuel tank and small foot pegs for the rider, while the engine bay is very exposed and has two air filters on the cylinder block and a small carbon-fibre exhaust tube with chrome tip on the right side.

The rear section features a small seat with additional support frames, a single rear lamp on the end and a license plate below the seat, while the rear wheel is attached to the body by thin swingarms and supported by a single suspension spring, along with a small rear mudguard. The Defiler also sports fully-animated chain drive and sprocket on the left side.

The primary colour of the bike is applied on most of the bike's body, while the secondary colour is applied on the frame, fork legs, clamps and small details on the front mudguard, fairing and front body panels. The wheels are of a unique design, using four-spoke rims wrapped in high-profile tyres, with the rear one being slightly wider.

The Defiler's speed and handling rivals that of the Hakuchou and the Akuma, having excellent speed and turning radius in terms of tacking corners and weaving through traffic with relative ease. However, it falls behind motorcycles such as the Hakuchou Drag or the Bati 801/801RR. It can still perform wheelies, however, allowing to pass over small obstacles.

The bike is powered by what looks like a 3-cylinder engine, evidenced by the three exhaust tubes coming from the front of the engine block. Said engine is coupled to a 5-speed gearbox and the sound is derived from the one used in the Akuma and the Hakuchou.

Installing any "Headlight" modification will increase its traction slightly, in the same way as a spoiler. 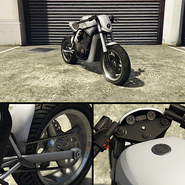 The Defiler on the Rockstar Games Social Club.

The Defiler on the updated Rockstar Games Social Club.

The Defiler in the cinematic preview on Rockstar Games Social Club.