21:00
“These Merryweather, they kill who they please. Life and death - the ultimate deregulation. Someone has contracted them to go after an associate of mine. He needs to get back to Mexico where there are laws against this madness. Pick him up at the airport and travel with him to the desert airfield where we have a plane waiting. There's some aid at my lockup if you need it.”
— Description

Defender is a mission in Grand Theft Auto Online, given to the player by Martin Madrazo. It is available for up to two players.

Madrazo notifies the player that one of his associates has been targeted by Merryweather Security Consulting following a bounty placed on his associate by an unnamed party. Madrazo is attempting to get him over the border to Mexico where the government does not advocate private militias - but there is a lot of Merryweather soldiers between Los Santos and his plane to freedom. The player(s) must protect the contact by using Buzzard Attack Choppers which are provided by Martin at his at lock-up (or the player's own armed helicopter called in via Pegasus) from a rendezvous at Los Santos International Airport until he reaches Sandy Shores Airfield, while neutralizing both air and (optional) ground units. 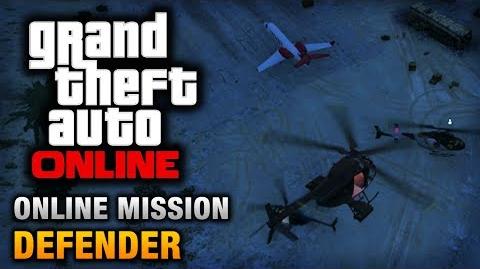