One of the lookouts falling onto a parked Cavalcade

• ­Playboy has left the weapons in a car in an alley downtown.

• ­Take out the lookouts.

• ­Go to the construction site and find the first Union leader.

• ­Strike out the Union leaders.

• ­Take down the next Union leader.

• ­Backup has arrived to protect the last leader. Take him down.

"This is my town! Look at it. All them tiny ants down there. Man, shit is crazy."
— Playboy X

Deconstruction for Beginners is the first mission from Playboy X in Grand Theft Auto IV.

The mission starts with Playboy speaking (privately) with Niko Bellic on his top-floor balcony, away from the two women he was just sitting with. He explains his success in the city, just as Dwayne Forge -- a figure of his past who was mentioned in Niko's last encounter with Playboy. He reveals that he broke free from prison, and subtly criticizes Playboy for not having called in the last 4 years or having visited him. Playboy asks Niko to come downstairs, but Dwayne and Niko speak briefly.

On the way to the construction site in Castle Gardens, it is explained that Playboy X wants a real estate developer named Yusuf Amir to be on his team. However, Amir is completely ignoring Playboy X. Therefore, in order to get in his good graces and show that he has some influential power in Liberty City, Playboy sends Niko to clear out every last Union tough-guy goon, working for the Messina Family, on the construction site seized by the Union workers from Yusuf. X believes that Yusuf will then notice that Playboy X means business.

Niko drives with Playboy X to a construction site in Castle Gardens, Algonquin. Niko then gets into the SUV that is waiting in the alleyway to acquire an AK-47, Sniper Rifle and 20 grenades. After the player gets out of the weapons van, Playboy will get onto a window cleaning platform at the side of a nearby building. The player can choose to follow him and go up to the roof, or eliminate the lookouts from the sidewalk.

Once the player is on the roof or sidewalk, equip a sniper and take out the three lookouts on the cranes (1-3 on the image).

When the player snipes each of the lookouts, they will have a different dying cutscene. The first will fall over, discharging his AK-47 and dies. The second falls off the crane and smash onto a nearby parked Cavalcade, destroying its doors, heavily denting the roof, breaking all its windows, triggering the alarm system and then landing on the ground. (The player can take his AK-47 ammo which falls beside the car and lands on the ground.) The third will fall off the crane and smash hard on the street below. Once Niko eliminates all three lookouts, he heads into the construction site and takes out the first Union leader that will be right in front of the construction entry. A first aid kit is attached to a column nearby.

Once everyone is killed on the ground level, Niko runs up the wooden board at the back of the site where more goons will be waiting for him. Niko kills all of them before proceeding to the second "floor". A cutscene will show Niko running for cover as soon as the player reaches the top of the wooden board. Niko then takes out the second Union leader. There is another first aid kid next to the wooden board from were Niko came from in case the player needs some health.

Niko then goes left around the corner and takes out the goons and the third Union leader that will be taking cover behind some pillars. Once the third Union leader is dead Niko runs ahead to find the fourth and last Union leader. The fourth leader will start to run away and a helicopter will arrive with more backup for the workers. Playboy warns Niko of the guards in the helicopter. There's a third first aid kit near some gas tanks beside the place were the helicopter landed, and the player can use it if necessary. Niko continues to chase the fourth Union leader. Once he is in the open, Niko shoots him to death.

After Niko kills the fourth Union leader, he will be paid and Playboy X will call to debrief him.

"A violent shootout in Castle Gardens earlier as striking union officials were killed at a construction site. Allegations had previously surfaced that the unions were blackmailing the project developer Yusuf Amir. Mr. Amir had no comment aside from promising that the development would be suspended as a mark of respect for those who passed."

"Several members of the local Liberty City union for construction workers were massacred on a building site today. The site had been shut down because of disagreements with the property developer, Yusuf Amir, that resulted in a strike. No one is sure what caused the altercation but the union, which was long alleged to have links with organized crime, seems to have had several heavily armed delegates at the site."

The two women with Playboy X.

Lookouts positions.
Add a photo to this gallery 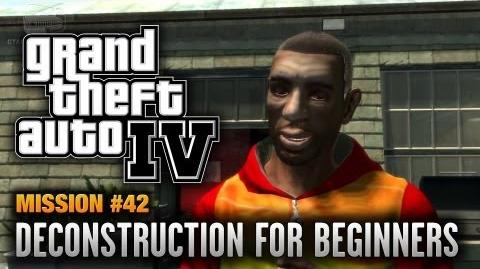 Retrieved from "https://gta.fandom.com/wiki/Deconstruction_for_Beginners?oldid=1322472"
Community content is available under CC-BY-SA unless otherwise noted.